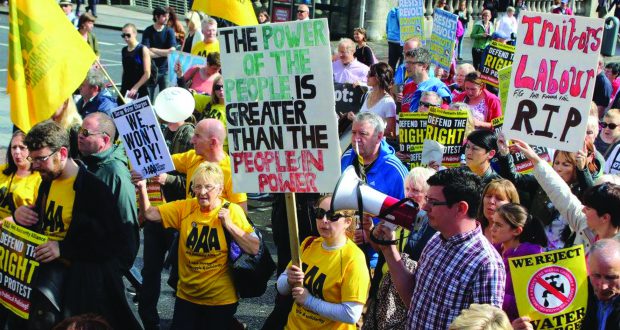 Remember when a majority of people, by maintaining a boycott, put water charges on the agenda at the last election and 70% of the electorate voted for TDs opposed to the charge? Remember this new, weak government sweeping the issue under the carpet by suspending payments and a vague plan of an “expert” commission? Well, all that has come back to bite them.

When met by an impressive grassroots movement of opposition to the introduction of water charges in 2014, the last government tried a “carrot and stick” approach. Among other things they were forced to drastically reduce the cost of the charge. However, the mass boycott held firm, and the government’s position was weakened so much they had to make the very significant concession of suspending all charges in the aftermath of the election.

So now a new and much weaker government is hobbling along to the summer recess but what comes back onto the agenda? Water charges. And what does the government do? They try another “carrot and stick” approach. And once again it is not working for them.

The “carrot” was helpfully explained to us by Joe O’Toole – an “expert” in paying water charges (and former ICTU bureaucrat!) and chair of the expert committee: “People voted a certain way, Leinster House is not prepared to grasp that particular nettle, so we have to find a solution that will have enough sugar on it to make the medicine go down easily.”

Just in case anyone still had illusions as to what this commission really was about, Joe clarified the real tasks for us all. Anti Austerity Alliance TDs pointed out that, while his bluntness was welcome, his utterances made a complete mockery of the “expert” commission. O’Toole was soon forced to collect his P45 in yet another fiasco for the government.

At the same time, the EU commission was invited to give their verdict about whether or not we should pay water charges. They needed two takes to get it “right” – the first one at the end of May being rather non-committal. But after a nod and a wink they firmed up their answer, and take a guess: the unelected, pro-privatisation EU Commission thinks we definitely should pay water charges.

Just days after Brexit, they showed their true colours, defending the interests of multinational corporations and driving the neo-liberal agenda of never ending austerity against the clear will of the majority of working class people in Ireland.

Despite two years of manoeuvring, the establishment have not succeeded in making us pay water charges. The latest non payment figures show that after the latest debacle, more people than ever have voted with their feet: non payment increased by 45% to 75% of households! Mass resistance on the streets and most of all the refusal to pay have made this austerity tax uncollectable.

However, these latest sagas also show that the establishment have not given up the ghost just yet. The water charges movement has delivered a significant blow to their plans, but we need to remain vigilant and mobilise to remind them what we really want: abolish the charges now!