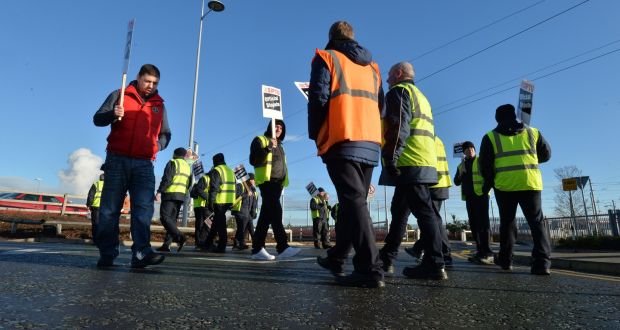 Predictions of a “summer of discontent” abound with industrial action looming in a number of sectors, both public and private. The state faces industrial disputes and possible strikes in the public sector with teachers, nurses, psychiatric nurses, midwives, Gardaí, as well as bus and rail workers with Irish Rail, Bus Éireann, and Dublin Bus. In the private sphere, the Tesco dispute is significant – with over 15,000 workers employed by Tesco Ireland, other low paid retail and service workers will be watching closely, as will the bosses.”

This increased class conflict, is an outgrowth of years of a neoliberal drive by the establishment. Neoliberalism means the removal of all barriers to making a profit – an assault on the public sector, the privatisation agenda, little or no tax on profits, the neutering of any effective working class organisation in terms of fighting trade unions in order to intensify an attack on workers’ wages and conditions and a growth in finance capital, deregulation etc.

Essentially these are the conditions that led to the economic crash, as well as the “solution” imposed in the form of the austerity agenda in an example of what Naomi Klein has deemed “shock doctrine” politics. This neo-liberal austerity agenda has meant that “profits at Ireland’s top 1,000 companies roared to a record high of some €36bn in 2016” (Irish Times). In essence, successive Governments have launched an all out assault on the public sector – and public sector workers – in order to assist the agenda of the whole establishment, increasing productivity along with worsening wages and conditions across the board, i.e. to squeeze the working class to the limit as a means to increase profits.

Profit margins in Tesco in the south of Ireland are the highest of any of the company’s operations anywhere, for example. In this way, “an injury to one, is an injury to all” has to be a continued guiding maxim for all workers. A successful pay claim by any section of workers is a blow to the neoliberal agenda, is a blow to all bosses and the political establishment, and is a fillip to all workers in their own quest for decency at work.

How will workers’ pay increases and better working conditions be paid for? Quite simply, they will be eating into the enormous profit margins at the top – that’s where workers’ improved living standards will come from.

The Luas workers, acting independently of the SIPTU bureaucratic officialdom, have illustrated what can be achieved when workers rely on their own power. They took on a ruthless multinational in the form of Transdev determined to bring about a race to the bottom in their wages and conditions. If workers are to see any meaningful recovery in their living standards they must be prepared to take such militant action and the trade union movement must be prepared to back them up.

Ultimately the industrial action that is needed to fight the generalised offensive of capitalist neo-liberalism must be linked to the reclaiming of the trade unions from the bureaucracy that dominates the movement currently and the building of a new­­ party for workers that can politically challenge the rule of the big business in our society.