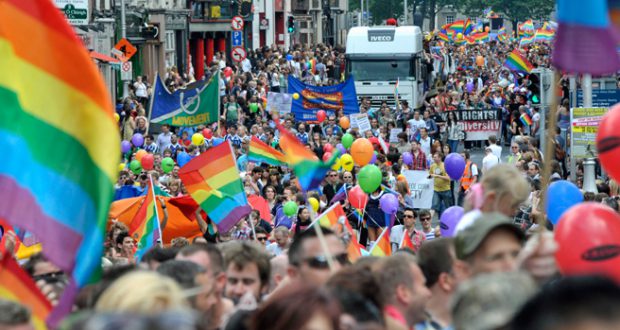 Pride 2016: Solidarity against homophobia and transphobia

The homophobic mass murder in Orlando has shown that, despite the enormous progress that has been made in recent years, homophobia is still a brutal reality in society. This was not just a random event, or an attack on society as a whole, but a hate crime against the LGBTQ community.

Homophobic violence is still a reality, in Ireland and across the world. In some countries, it comes from the state: in 73 countries it is illegal to be gay; in ten it is punishable by death. Around the world we see a new right-wing political offensive targeting LGBTQ people; from the ‘bathroom’ bills in the US targeting trans people, the attempts to allow discrimination based on religious ‘conscience’ and the threat posed by the rise of the far right.

However, the killing in Orlando also brought out solidarity worldwide against homophobia and hate, with vigils held across the US and internationally. One year ago, LGBTQ people won an enormous victory in the marriage equality referendum. This victory was the result of years of campaigning by LGBTQ people, but also reflected a real social movement that developed during the campaign involving young people, women and working class people. It showed the transformation of attitudes that has taken place in Irish society in recent years and the power of solidarity.

Despite the victories last year on marriage, Gender Recognition and employment equality, there is still inequality built in to Irish law. Gay men are still subject to a discriminatory blood ban. Trans young people are still excluded from Gender recognition.

Above all, the homophobic Catholic Church hierarchy continues to control the majority of schools and hospitals. A new study from Trinity College, The LGBTIreland Report, shows the reality that homophobia is still a huge issue for young people. It found that LGBTQ people aged 14-18 had levels of stress, anxiety and depression four times the average for their age group; 56% had engaged in self-harm; 70% had suicidal thoughts.

We urgently need comprehensive, non-heteronormative, sex education which educates and affirms LGBTQ people in all schools. This is far from the reality for many young people today. How can we achieve this if these schools are run by the Catholic church or other homophobic religious institutions? We need to fight for a real separation of church and state in this country.

To achieve this, we will have to fight against the fundamentally conservative nature of the Irish establishment. Look at the attitude they have taken to the 8th amendment, with both Fianna Fail and Fine Gael opposed to any change, and none of the main parties willing to stand for the right of women to control their own bodies. Similarly, none will challenge the power the Catholic church still has over education and other public services.

To achieve change, we need a real movement, from below, with the widest possible involvement rather than relying simply on lobbying politicians etc. We also need solidarity, because the right-wing forces who are targeting LGBTQ people go hand in hand with those who espouse racism and sexism. We need a united movement of LGBTQ people , migrants, women and all working class people to take on their agenda and all inequality in society.

We live in a capitalist system which has oppression and inequality at its core. To achieve real and lasting equality will require a challenge to this system. The austerity agenda pursued by the government and the 1% has meant cuts in mental health services, homelessness services and many other cuts which disproportionately affect LGBTQ people. The establishment will constantly use bigotry and division as a means of turning people against one another and distracting from the real problems in society.

That’s why we need a left political movement which unites all those who are oppressed and exploited in society in a struggle for a new, democratic and socialist society where power and wealth is in the hands of the majority and the need for inequality and division is removed.