Thirty years a member of the Trotskyist movement, Colm Halpin died on 27 May last having fought a battle with cancer.

Colm, a working-class Dublin man, was without doubt one of the best-loved members of our movement down through those years.

He joined the Militant Tendency (forerunner of the Socialist Party) in 1986 in his mid-30s and stayed true to his socialist ideas and principles in unwavering fashion over the following three decades.

Colm was the grandson of William Halpin, a trade union activist and a member of the Irish Citizen Army who fought in the City Hall building on Dame St during the 1916 Rising.

Colm was one of ten brothers and sisters. His youth was difficult and he had harsh experiences of those penal institutions now so totally discredited.

There was a period when he was in difficulties with the law, but with remarkable determination he turned his life around, dedicating his time to fighting to change the system that still causes so much trauma for hard hit working class communities.

His decision to join the fight for socialist change marked a key moment in his life – and he threw himself into his new commitments.

He made a particular commitment to solidarity work with workers in struggle and was a familiar face on many Dublin picket lines down through the years.

He was fearless when defending the rights of progressive campaigns from physical threat or assault.  With the rise of Youth Defence, an anti-choice group, in the early 1990s and an increase in physical threats to the Left, Colm was often to the fore in physically defending activists in their campaigning work.

But Colm wasn’t just an activist.  He took a great interest in socialist ideology and became well acquainted with the writings of Marx, Engels, Lenin, Trotsky, Connolly and others.

At social events, Colm would take a turn at singing a song, his favourites were “Dublin City 1913” and “Jarama Valley”. He liked to dance and would often be one of the first up on the dance floor, too

Colm Halpin was a fiercely independent man. He would develop his own ideas on issues, make suggestions and if necessary argue his corner.  He lived independently in East Wall with his cancer until very near the end and only entered the hospice (St Francis’ in Raheny where he received excellent care) in the last few days of his life.

Colm Halpin was a warrior for socialist ideas. We will never forget him.  We carry on the fight that he was part of for so many years and his memory will inspire us for years and years to come.

We extend our solidarity and sympathy with Colm’s former partner Marie who was in regular contact with him during his illness, to his children and grandchildren all of whom live in England and to his mother, brothers and sisters.

“Colm Halpin was the first socialist I ever met. In 1993 he was in Stoneybatter in Dublin, supporting the ‘locked out’ Pat the Baker strikers. I took a leaflet and bought a copy of the ‘Militant’ off him that day and left , secretly delighted that he took me seriously enough at 16 to ask if I was interested in politics.

After reading the paper cover to cover and thinking all day and night about what Colm had said I decided I was interested in this type of politics and two days later I went to a party branch meeting. Colm was there and after the meeting we walked back up to Cabra together, as we did every week after that for many years. I looked forward to our ‘post branch’ talks on the way home, I would ask the questions I didn’t want to raise at the branch in case I looked stupid and Colm would patiently answer. Other times we would talk about key events in history, like the Russian Revolution – when Colm was talking about something like that he would get animated and do the actions! It was like street theatre and the journey home would take twice as long as he acted out how the working class took power!

Years later when myself and others ended up on strike for more than ten months during a dispute at BATU, Colm was a source of huge support and inspiration. Sometimes we would get fed up and just feel like going home and not bothering to picket all day – but we never did in case Colm came and we weren’t there. There were many days when it was Colm that kept us going.” 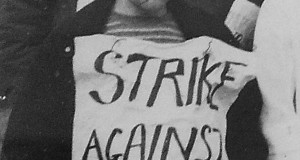