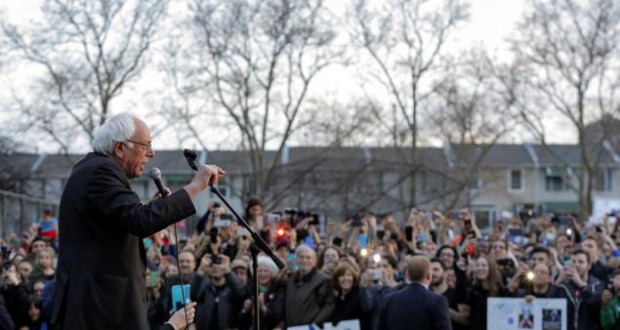 Why Sanders must stand as an independent

It is evident that the (un)Democratic Party has done whatever it thought necessary to block Bernie Sanders from gaining the presidential nomination and to stem the grassroots movement intent on challenging the billionaire class that has developed around his campaign, writes Emma Quinn.

Despite national polls continually showing Bernie Sanders with the highest favourability rating of all presidential candidates it is clear the Wall Street dominated Democratic Party is no place for a real pro -worker and anti-corporate challenge to the establishment. The completely undemocratic methods and structures the Democratic leadership imposes on the primary voting process, the fact only a tiny percentage of national voters participate, the use of super delegates, the power of Wall St money and the vehement attacks by the establishment media has made a Sanders nomination virtually impossible.

Despite the road blocks and rigging, momentum behind Bernie has been strong: in March alone a whopping $44 million was raised in small donations from working class people beating the corporate backed Clinton for the third month in a row a clear sign of the strength that continues to grow around his campaign. The demographics of the tens of thousands attending the vibrant rallies in support of Sanders are indicative. Young, working class, people of colour and women are stepping forward to support and get active in the movement, to the gall of Clinton.

Bernie’s calls for a “political revolution”, a single-payer free healthcare system, a $15 minimum wage, free college education, massive investment into infrastructure and taxing big business and the super wealthy have resonated with tens of millions of ordinary people. Significantly it is working and young people who have been inspired by the self-professed socialist; who has no doubt contributed to a growing interest in socialism developing in the US, with young people in particular seeking an alternative to the failed capitalist system.

The election and re-election of Socialist Alternative (sister organisation of the Socialist Party in the US) member Kshama Sawant to the city council in Seattle is evidence that this is not a fluke or freak occurrence but the result of a politicisation and increased disillusionment with the capitalist establishment. Over 800 people bought copies of Socialist Alternative’s paper at two recent Sanders rallies in Seattle showing a real appetite for socialism amongst his supporters. The successes of Kshama and Socialist Alternative in Seattle also shows that not only is it possible to have a powerful campaign outside of the Democratic Party, but actually a break from the undemocratic Democratic Party is exactly what is needed to allow the movement for Bernie to flourish.

The fight for a political revolution must not be allowed to wane when, inevitably, Clinton is announced as the presidential candidate at the July Democratic Convention. Bernie must break free and fight right through to November. The Sanders supporters, and with them swathes of people that have become politicised via their support for Bernie, will not be content to row in behind war monger and Wall St backed Clinton.

Sanders should not bow to the pressure of the “lesser evilism” argument to support Clinton against Trump. This would only serve to demoralise and disorganise the growing movement when in fact the best way to halt the revolting racist and sexist Trump is the building of a force  that represents, fights for and unites working class people and crucially points the way to how we can make real change in society.

We have reached a truly historic point. Never before has there been such an opportune time to begin building a new political party to take on the 1%, which both the Democratic and Republican parties represent. The type of party needed is one which rejects corporate money and influence, that has genuine democratic structures, which opens up Bernie’s campaign to become an organised movement of millions, a party which embraces Black Lives Matter, the student and environmental movements, the fight for $15 now, those fighting for women’s and LGBTQ equality and other struggles the young and working class are waging across the US; a party of the 99%. Such a force could deliver a powerful blow to the US establishment.

Bernie not acquiring the Democratic nomination should not be the end; but the beginning of a movement and the launching of a new party that takes on the 1% and inspires the working class in the US and across the world to fight for real socialist change. The movement behind Bernie shows a fightback can be waged; now we need a strategy and an organisation that can propel that movement forward.