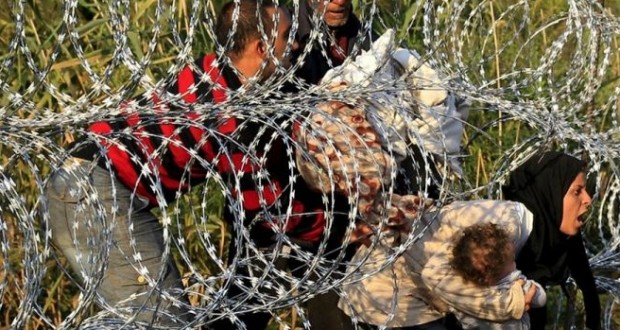 Imperialist intervention into the Middle East by the US and key EU powers, aided by the Irish state with warplanes refuelling in Shannon, is at the root of an unprecedented humanitarian crisis. Today, over 50% of Syria’s population are displaced, many of whom have already been bereaved of loved ones, have been traumatised by seeing their home towns and cities razed to the ground, and who have been victims of sexual violence as rape is used as a weapon of war.

Over a million refugees came to the EU from Syria and other war-torn states in 2015. Lebanon, Iraq, Jordan and Egypt have 2 million refugees from Syria alone, and Turkey already has 2.6 million. One million refugees constitutes under 0.2% of the EU population. Refugees in Lebanon constitute 20% of the population, which would equate with the EU taking 100 million refugees. Nonetheless, the EU’s refugee crisis has caused the biggest threat yet to the EU project to create a unified political and economic entity that acts in the interests of the major EU banks and corporations.

With a central tenet of this EU project being the free movement of labour and capital, the move to enforce borders between EU states constitutes a major threat to the EU project and illustrates how the refugee crisis could be the issue that causes a breakup of the EU. The idea of a resettlement programme, preferred last year as a solution, has not transpired.

The unwillingness of some of the richest countries in the world to provide the right to asylum to those fleeing for their lives, is an indictment of the EU and of each of its states, including Germany. Merkel who sought to soften her image by welcoming refugees was a central architect of the recent inhumane EU-Turkey deal, the latest attempt to “solve” the refugee crisis.

Under the EU-Turkey deal agreed in March, Turkey, with the support of Nato ships are stopping people fleeing across the Mediterranean to Greece. This constitutes an even further militarisation of the EU and a further fortifying of racist ‘Fortress Europe’. Refugees arriving in Greece are to be sent back to Turkey. In return, the Turkish government, a vile and increasingly dictatorial regime that is waging a war on the Kurdish people and is repressing any dissenting voices in Turkey, will receive some aid from the EU , have its EU accession-bid considered , and an agreement that a relatively small number of Syrian refugees, (300,000 has been mooted) be accepted into the EU over time from Turkish refugee camps. Only Syrian refugees will be accepted into the EU under this deal.

“…we are coming from a destroyed city.  Not only is there war in our country but the situation in Turkey is bad for us. We endured four years of war, bombardment, rocket attacks… I don’t want to be sent back to Turkey because my father and two sisters are in Germany and I miss them.”

This is what Ahmed, a refugee from Aleppo, Syria, told Al Jazeera news on his arrival in the Greek island of Lesbos. No amount of walls, no amount of repression, can stem the flow of refugees.

The EU-Turkey deal will only increase the misery and the deaths of human beings fleeing extreme oppression. On 18 April , reports of up to 400 people drowning off the Egyptian coast as they set off to seek refuge in Italy on the one year anniversary of 800 drowning in one capsizing in 2015 off Lampedusa, sharply illustrating the murderous implications of the EU’s racist blocking of all routes to asylum for refugees.

This contrasts with the inspiring human solidarity shown by the ordinary working class and poor people of the island of Lesbos in Greece among many other places across Europe as they welcome and seek to aid the refugees who arrive. However, a hated political establishment across the EU that has presided over a neo-liberal attack on working class living standards and  a recovery for the rich and for profits, is facilitating the emergence of a racist right-wing in many states.

Further walls, borders and repression against refugees only serves to aid such dangerous political forces to grow. The emergence of resistance by refugees themselves in opposition to repression and coercion as they seek refuge in the EU, points to the only solution  – a working class struggle and revolt that works in solidarity with the refugees to challenge the whole political establishment and the status quo of capitalism.

Such a left-wing and socialist challenge in Europe would seek to seize the wealth of the elite 1%, who have been shown to be thieves by the Panama papers with half of world trade passing through tax havens, with a view to eliminating the profit motive and to utilise the ample wealth and resources to provide for all.