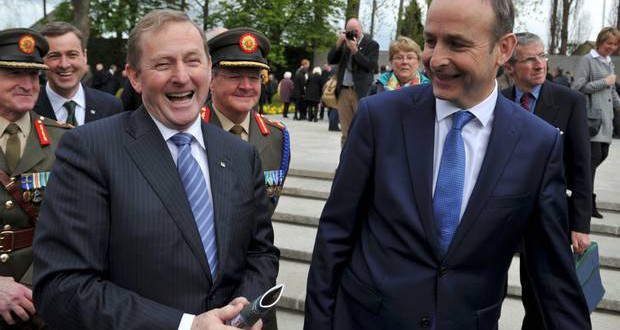 After the election Enda Kenny strutted around repeating to himself, “I’m still the Taoiseach”. It’s taken two months but now this “emperor” is staggering not strutting, barely wearing a fig leaf and making concessions to Fianna Fáil so they can cobble together a minority government.

He’s likely to creep over the finishing line and become the first ever Fine Gael Taoiseach to be re-elected but any sense of achievement won’t last; it’s likely to be all downhill from there.

This isn’t a “Grand Coalition” of the two traditional establishment parties, but it’s a very close first cousin. It’s a turning point forced on the capitalist establishment, much more significant than the Tallaght Strategy of twenty nine years ago.

Then Fianna Fáil was just three short of a majority and both parties combined had 132 of the 166 TDs. This is a forced arrangement because they have less than 50% of the popular vote. These parties (with Labour’s assistance) used to operate as alternate governments, the first and second eleven of the establishment, now they have to combine to field one team.

This arrangement is also completely unrepresentative of people’s desires for change, made up as it is of the defeated parties from the last two general elections.

It seems the deal struck will mean that any proposals from the new commission for water charges will have to be agreed to by the Dáil. It’s therefore possible that this new government could still perish on the rock of water charges, just like the last one.

While Fianna Fáil spurned the trappings of office this time, and they will claim credit for the suspension of water charges, if they support Fine Gael for two years plus, they will be implicated in the policies imposed and in the crises in housing and public services which are set to get much worse because of chronic under-funding.

The (not so) Independents

The new government will also be made up of ‘Independents’, some reports speculating that ten or more of the 23 Independents will not be able to resist the temptation of doing the state and themselves, “some service” by coalescing with Fine Gael.

Such an involvement of Independents can raise a serious question over the value of Independents who just support the establishment parties and the system, and can help push forward the understanding of the need for a specifically Left alternative.

Few governments in Irish history have started out from such a weakened state and it’s hard to see this arrangement lasting for the duration. In fact, it’s entirely possible that it could be collapsed out of office much sooner than that; possibly a result of unpopular policies provoking a new challenge from the streets or a decline in the economic situation smashing it against a wall.

If Britain voted to leave the EU in the June referendum, that would propel Kenny’s weak administration into completely unchartered waters and could cause significant economic and political instability, after only months in office.

Harry McGee’s comments in the Irish Times regarding what’s in store are perceptive, “The AAA-PBP alliance will continue with its unaltered course of outright opposition. Sinn Féin will have to start nuancing its response, to avoid being accused of being opportunistic and cynical. Fianna Fáil might find itself in the dock as an “accessory before the fact” with nothing to show for it. Fine Gael might end up looking like a party that has been shorn of all its policies and principles. And into that mix will start a succession race in Fine Gael, which will start nanoseconds after Enda Kenny is nominated as Taoiseach. Fasten your seatbelts. It’s going to be a turbulent journey.”

Gerry Adams convened a meeting for all ‘progressive’ opposition TDs in the Dáil on a Wednesday, but the previous Sunday on The Week in Politics, when the government negotiations looked bogged down, he offered that Sinn Féin was open to discuss the possibility of government with either Fine Gael or Fianna Fáil.

Sinn Féin will have to be mindful of dizziness as their leaders chart a zig-zag course of posing as a firm opposition, while at the same time signalling to the establishment that they can be trusted.

The Socialist Party, as part of the Anti-Austerity Alliance and the AAA-PBP, believes it is essential to popularise the need for a genuine Left government to challenge capitalism as the only way to resolve the key issues facing Irish society.

Inside and outside the AAA we will outline the need for socialist policies which take the key wealth and resources of society into democratic public ownership and use them to put people’s needs before profit. In order to fight for a left socialist government, a new party or movement for all working class people also needs to be built. Speed that day. 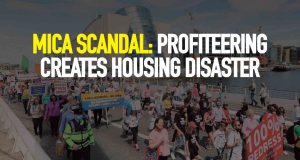