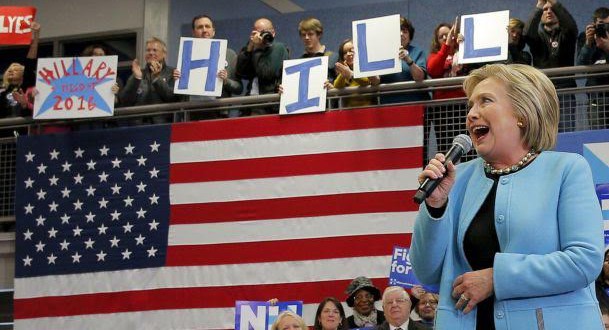 Hillary Clinton’s bid to become to the first woman President has resulted in calls for progressively minded workers and young people across the US to support her. The latter in particular, and significantly young women, have rejected this and instead have supported the candidacy of Bernie Sanders.

Several opinions have tried to deduce how this could be. Disgracefully, popular American feminist Gloria Steinem said that young women were just going where “the boys” are. The LA Times concluded that “getting a woman in the Oval Office has not ranked as high on [young women’s] priority list as putting Wall Street or the giant health insurance companies in their place.”

Crucially, the reason why young people are supporting Sanders over Clinton is that the latter is an establishment stooge and the former calls for a political revolution against the billionaire class. He is articulating the message of the Occupy movement, of opposition to the 1% in the US. This is much more appealing to a section of people who have broadly rejected the pro-war and pro-big business political establishment in the form of the Republicans, and Democrats such as Clinton.

This generation in the US has been marked and politicised by the Iraq War, horrifying in its destruction for naked greed; as well as economic crisis and a meaningless “recovery”. Half of the population under the age of 35 believe the “American Dream” is a myth. With graduates leaving college with an average $30,000 of debt and earning approximately $25,000 per annum, they are worse off than their parents. Hillary Clinton has voted for war, not only in Iraq but  also supported the bombing of Libya and Syria and is funded by Wall Street.

No champion of women’s rights

“But why shouldn’t disadvantaged groups vote for members of their demographic? Voting for someone who has experiential knowledge of the obstacles to participation that affect you makes perfectly good sense…”  These were the words of Emer O’Toole in her Irish Times article (April 11, 2016) pushing the “feminist” case for Hillary Clinton.

Clinton was the only woman member on the board of viciously anti-union Walmart from 1986-1992. Walmart is the biggest private employer in America and pays their workers so poorly they have to rely on food stamps. Their treatment of pregnant workers has been described as “inhumane”. Clinton’s presence on the board, with $100,000 of vested shares, made little difference to the women who make up 60% of the company’s workforce. While it is important to have women representatives in all aspects of society, feminising the elite will not bring about any real equality for women as the capitalist system is incapable of providing this.

When it comes to abortion Clinton is clearly moving away from a clear pro-choice position. In September 2015, she made overtures to anti-choice Republicans, saying, “…if there’s a way to structure some kind of constitutional restriction [on abortion] that takes into account the life of the mother and her health, then I’m open to that.”

In the 1990s, Hillary Clinton backed her husband’s gutting of the welfare system which plunged millions of women into abject poverty. This had a particular damming effect on Black people. In 1996, Hillary Clinton referred to the Black youth as “super-predators” condemning Black people for violence in the US.

Furthermore her refusal to back investment in a comprehensive single tiered healthcare system, accessible and affordable housing for all, and her implicit support for Walmart’s tactics for firing union supporters clearly contradicts any notion that she defends the rights of working people.

Hilary Clinton cannot be supported in this Presidential election. The campaign has shown the potential to build an alternative to the political representatives of Wall Street and for the building of a party of the 99%.