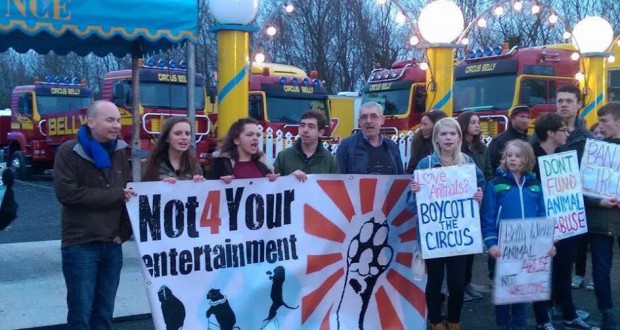 Posted by: Socialist Party Reporter May 9, 2016

Animal act circuses are a horrific form of animal abuse and exploitation. No wild animal should be trapped in a tiny enclosure, dragged around the country and forced to perform for human entertainment.

Training animals to do circus tricks can’t be achieved with positive rewards because tigers, for example, are naturally terrified of fire but are often forced to jump through hoops of it. Elephants don’t dance on their hind legs in the wild, and they often suffer joint problems from carrying all their weight.

Circus Belly Wien became a point of protest after their arrival in Ireland. With hundreds of peaceful protesters outside this notorious circus, the circus staff were feeling the pressure, assaulting a group of protesters, the youngest being a 15 year old girl. They attempted to intimidate protesters with abusive, misogynistic and racist verbal attacks, but to no avail. The circus arrived at the end of February, and planned to stay until November, but left, disgraced at the beginning of April because of the overwhelming opposition to them.

Animal rights isn’t up to scratch in Ireland with issues like animal circuses, greyhound racing, hare coursing and fur farms, to name but a few, still left ignored by the Irish government. One way to drag this country into the progressive place it claims to be is by having a ban on circuses with wild animals. Belly Wien brought the issue of animal act circuses back on the agenda and the urgent need to legislate to ban circuses with animals has never been more evident.