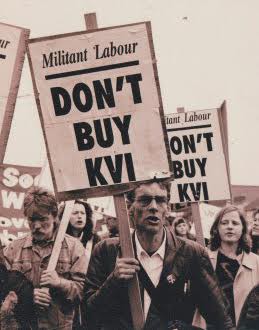 It is with great sadness that we bring the news of the passing of comrade Colm Halpin. Colm died today in St Francis Hospice, Raheny, surrounded by comrades. He had been suffering from  cancer, very bravely borne.

Colm had a history of three full decades as a revolutionary socialist activist. He joined Militant the forerunner of the Socialist Party in 1986 and thereafter dedicated himself to the struggle for a better world. Colm was active in the Dublin City Centre branch of the Socialist Party and until his health began to fail him he was a stalwart supporting workers on picket lines, selling Socialist newspapers at demonstrations and meetings and in dialogue with people on campaign stalls.  Particular strikes like Gateaux 1991, Japan (Ilac Centre) 1992, Pat the Baker 1993 and ALDI in Parnell Street in 2000 stand out as struggles where Colm was very active in support of workers who deeply appreciated his support.

He was the life and soul of many of our summer camps and social events and always among the first to get up for a song with “In Dublin City in 1913” being his favourite.

Colm moved into a senior citizen flat in East Wall some ten years ago and in the years since was involved in the struggles in that community against austerity including the bondholders’ taxes in the form of property tax and water charges.

Colm was proud of a radical and socialist tradition in his family. His grandfather William Halpin was an Irish Citizen Army combatant in the 1916 Rising being stationed in City Hall. Colm had a deep interest in these events and in working class history in general and involved himself in the East Wall History Group.

Our deepest sympathies to Colm’s  children, their mother Marie, his grandchildren as well as his own mother, brother and sisters and to his friends and comrades in the Socialist Party and the Anti Austerity Alliance.