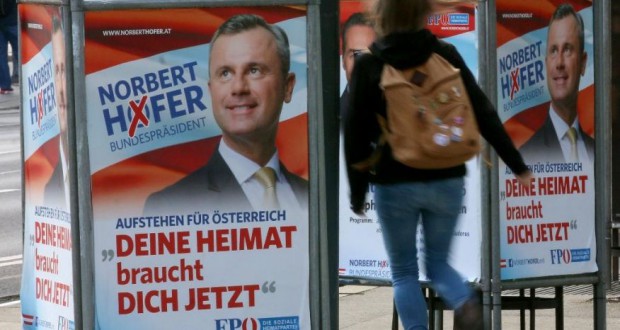 Since Saturday 23 April, a series of physical earthquakes have shaken Austria. But the most significant was the political earthquake resulting from the 24 April first round of the presidential elections. Norbert Hofer, the candidate of the far right, FPÖ (Freedom Party), led with over 35% of the vote. Far behind that, with 21.3%, came the favourite of all opinion polls, Alexander Van der Bellen (VdB), from the Green Party. An independent conservative, Irmgard Griss, a retired president of the Supreme Court, came third, with about 19%. The candidates of the two national ruling parties – the Tory-like ÖVP and the “social democratic” SPÖ – each won just over 11%; very different from the combined 90% of the vote these two parties scored between 1945 and the early 1980s..

Sunday 22 May saw the second round election between the now favourite Hofer and VdB. As the vote was so close, it was clear that no result could be reached on that day, as nearly 900,000 postal votes were not yet counted. When the final votes were counted, half of the country’s population were in front of TVs, mobiles and tablets, awaiting the result. In the end, VdB won, by just the tiny majority of 31.026 votes (he won 50.35% in total). This was the closest ever presidential election in Austria, more thrilling than many Oscar winning films, and had a huge political impact and consequences for Austria, as well as internationally.

Who is Norbert Hofer?

Hofer was the candidate for the far right Freedom Party (FPÖ). A party originally formed to give former Nazis a political home after 1945 it started to significantly grow after the late Jörg Haider took the leadership in 1986. Haider modified the FPÖ into the maybe first post-Second World War model of a far right populist party that similar parties in other countries followed. The FPÖ grew from winning around 5-6% to become the second largest party, with 26.9% of the vote in 1999. It went into government with the conservative ÖVP. Subsequently, the FPÖ split and, while it took time to recover, by 2013 it was again winning over 20% of the vote. In fact, the FPÖ gained in most recent elections.

The main reason for this is the worsening social situation, in combination with the transformation of the SPÖ, the former traditional social democratic party, into, fundamentally, a capitalist party. The FPÖ traditionally used racism to build its support but in the last ten years, or so, it also increasingly used social rhetoric with the result that – given the absence of a left alternative – it was the one party benefiting from the growing anger amongst an increasing number of working class people.

The FPÖ is strongly dominated by members of far right student fraternities (“Burschenschaften”) – the party leader, Strache, is a member, as well as the presidential candidate, Hofer. He is a member of a “German national” fraternity (which in Austria means a right wing supporter of uniting all German-speaking people), which only allows male members, wants to ban abortion, is in favour of an elite ruling and whose members sport the cornflower symbol (a symbol of the Nazis in Austria during the 1930s, when they were illegal under the rival Austro-fascists’ regime).

Hofer made some slips of the tongue in the campaign, such as, “You shall not be surprised what a president can do…” (referring to the fact that the Austrian president de jure is very powerful but, up to now, de facto has only a formal position). He made clear he would dismiss the government if he does not agree with what it does (he thinks it would not be acceptable to increase taxes and that the borders should be closed to refugees). Hofer said that he would deny the swearing-in of a female minister from a Muslim background if she wore a headscarf. So Hofer defiantly belongs to the ‘bad guys’ but it needs more explanation to appreciate what is actually dangerous about him and his party.

The FPÖ is a racist party and a neoliberal party, covering its neoliberalism behind racism. Whenever and wherever they were or are in power, the FPÖ implemented brutal social cuts. They carried out tuition fees, slaughtered the pension system and cut youth facilities and elderly care. Hofer in power would not have meant fascism in Austria. But it would have been the preparation for a double leadership of president Hofer with the current FPÖ leader, Strache, becoming Chancellor. This is a very likely possibility given the fact that the FPÖ has been leading in opinion polls for nearly one year. Such a double-headed FPÖ rule would have meant brutal neoliberal politics, combined with anti-women, anti-migrant, anti-LGBTQ and anti-Muslim measures.

This danger was very clearly seen by many people and this was why so many finally voted for VdB, although there was not much support for him personally, given that he was a pro-TTIP economics professor. Significantly, during the election campaign, VdB said he not accept the TTIP deal. Around 48% of all VdB’s voters only voted for him to stop Hofer. Likewise, sixty per cent supported the Green candidate for the first time after previously supporting the other parties. Only 11% voted for VdB because they thought he would represent their political ideas.

Who voted for Hofer and why?

Hofer got the best ever vote for an FPÖ candidate. But of those who voted for Holfer, only 12% said that refugees were their main concern. Also of those who voted Hofer, 71% were working people who fear that their living standards will decrease. Another 77% wanted a president who would tell the government “what to do”. Hofer had the support of 53% of all working people and 45% of those trade union members who voted.

This reflects distorted consciousness. The anger about the establishment is burning. There is a widespread hatred for everything from the top, as well as fears about the future. At the same time, the trade unions are passive or at best moderating job losses and cuts in living standards. No fighting alternative is given to the attacks.

Although some on the left, as well as parts of the international media, now say that nearly half of the Austrian population voted for a far right candidate (or some even say a “fascist”), this is not a precise way to look at the meaning of the presidential election result. Nearly 30% did not vote at all and the turnout was fourth lowest since 1951. Many immigrants, despite being long-term Austrian residents, were denied the right to vote. Hofer’s political opinions, which are very, very much to the right, were not the main reason people voted for him. Only a minority voted for all of Hofer’s policies, but many more were prepared to vote for him despite them.

The main reason for this was that Hofer managed to be seen as different, new, not from the establishment. The main slogan of the FPÖ in the second round was, for a “candidate who is located in the middle of society” – something that is not true, at all but shows that he would not have the same result if he would have stood openly as a far right candidate, let alone a fascist candidate. It’s true that decades of racist politics by the FPÖ and governments, alongside the increasing impact of capitalism in crisis, have led to a situation where an increasing number of people are prepared to vote for a party with open racist propaganda. But the main reason for Holfer’s support was to find a way to kick the government and the establishment. This is shown by the fact that in the first round the government candidates each only got around 11% and in the second round, VdB, who was (openly or not) supported by the whole establishment, representatives of the government parties and the media etc., only won by a tiny majority.

What to do now?

The background to the result is the deep frustration and anger over government policy. There is a general feeling that “it can’t go on like this” and there is widespread alienation with the government. The candidates that scored best were those who managed to present themselves as “different”, “independent” and “new”, although, in reality, none of them were any such thing.

The SPÖ presidential candidate was the former chairman of the public sector workers’ union, former chairman of the ÖGB trade union federation and, until recently, minister for social affairs. But over 60% of blue collar workers voted for Hofer. This also reflects how far the social democratic party has distanced itself from the working class. The first round of the election campaign was relatively calm and there did not seem to be much interest in the elections.

During the second round there was not a general mood of intense politicisation (aside from social media) but, again, it was just under the surface. The high support for Hofer and therefore the FPÖ is a severe warning. In particular, it’s a warning that a FPÖ chancellor might just be around the corner. The previous SPÖ chancellor, Faymann, stepped down and was replaced by a more dynamic politician, promising a “New Deal”. But the hope of sections of the ruling class is that this will be a way to stop the further rise of the FPÖ is wrong. The reasons for the FPÖ’s rise are the combination of a worsening social situation, a pro-capitalist, weak trade union leadership and the lack of a left alternative. A government that might present itself as more ‘humanistic-liberal’, while continuing or even speeding up the so-called reforms (i.e. attacks on the living standard of the working class), will only help the further strengthen the FPÖ, especially when a new economic crisis develops.

It is important that Hofer was not elected. But VdB and all that he stands for will continue to aid the FPÖ. The only thing that was won on Sunday is a breathing space. This has to be filled. Most on the left, leave aside the “progressives”, tried to campaign against Hofer by merely calling him a “Nazi” or stressing his far-right policies. They completely ignore how Hofer and the FPÖ manage to pick up and exploit the anti-establishment mood and the wish for change. A programme that answers the economic and social issues in the interests of working people is needed both to stop the FPÖ’s rise and to answer the questions posed by the increased refugee numbers. ‘Radical’ sounding slogans, like “FPÖ Raus! Flüchtlinge Rein!” (FPÖ Out! Refugees in!) are no help, at all, in trying to break people away from the FPÖ. In fact, taken literally, it implies punishing FPÖ voters in order to help refugees.

The SLP (sister party of the Socialist Party in Austria), began a campaign, “the rich have to pay”, some weeks ago, which goes down very well, including amongst people that voted for Hofer. At the same time, there is a new project developing (“Aufbruch” = “Departure”)  – made up of leftwingers formerly in the SPÖ and from left forces outside that party – that will start with a campaign around a similar issue, but where many of the people involved are aware of the need to build up “something new”. The Aufbruch national congress, on June 3-4, has already over 700 people registered and all its initial regional meetings have had problems of space given the many people attending.

This shows there is the possibility of using the breathing space to go in the direction that is necessary: building a fighting, democratic, left organisation that can offer an alternative, both to those who voted for Hofer to kick the establishment and for those who voted for VdB to prevent Hofer.