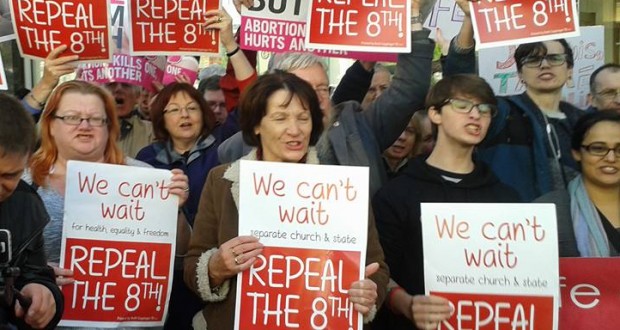 The general election has come and gone and the 8th Amendment is still here, in case you were wondering. Warm and cosy in the constitution where it has the power to strip women of their bodily autonomy and make them into incubators. Despite this, the mood has shifted.

Political parties are finding it more difficult to justify their opposition to abortion rights. The general election has shown that people want change; and women can wait no longer. The results achieved by  the Anti-Austerity Alliance’s first time candidates, Fiona Ryan in Cork South Central and Diana O’Dwyer in Dublin Central, show that there is a real appetite for change and an alternative.

They ran with abortion rights as the central message of their campaigns and with 937 (1.7%) and 721 (3%) first preference votes respectively, they are an illustration of the desire to repeal the 8th Amendment and to fully legislate for a woman’s right to choose.

It is also no coincidence that Renua was crushed. Their anti-women and pro-austerity policies are a symptom of an archaic mind-set. The fact that they have no returning TDs shows that the Irish working class have had enough of the politics of the 1%.

An Amnesty International Ireland/Red C poll run in March 2016 found that 87% of respondents want abortion access expanded and 71% believe abortion should be decriminalised. The question of abortion rights was often posed to canvassers emphasising the desire for the recognition of women’s fundamental rights.

It is the backward attitudes of the political establishment and the Catholic Church that stops women from gaining full rights over their bodies. Change has never been brought about by the powerful elite. It has never been kindly handed down. It is through action, perseverance and the struggle of  working class people, women and the oppressed that real reforms are achieved. We need to put pressure on whatever government is cobbled together to bring about a referendum to repeal the 8th amendment.

The struggle on the streets waged by the working class in a fight for abortion rights must be accompanied by the building of a principled left party to replace Labour that failed women while in power. We need to challenge the divisive, sexist superiority perpetuated by the ruling class and their representatives. We need to build a party of the working class to represent the working class. It is vital that we do this to tackle all forms of prejudice that ultimately only divide us and stops us from achieving the goal of a better, fairer society.

Join the fight against conservative right wing ideology of the ruling class by joining the Socialist Party. We are fighting for a woman’s right to choose, separation of church and state and a democratic, secular and socialist society based on the real equality and free from the rotten, backward capitalist establishment that runs this country.