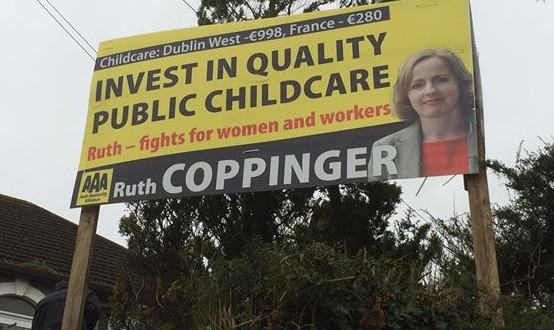 Childcare costs: End the burden of a “second mortgage”

Childcare in Ireland is simply unattainable for many working class women and particularly women raising children alone or on low incomes. For families that can or struggle to afford it, monthly childcare costs are a second mortgage.

According to the OECD Ireland has the highest cost for childcare in the EU. A crèche place for one baby can be as high as €1100 per month in Ireland, compared to around €280 in Finland, Norway, France, Spain, Belgium and Germany. To barely meet monthly childcare costs for two children a woman would have to earn €30,000 a year, this in the context that 50% of women workers earn €20k or less annually and make up 60% of low paid workers (NERI).

Despite their promises, while in government, Labour and Fine Gael (before them Fianna Fail) failed to invest in any real way, UNICEF recommends states spend 1% of GDP on childcare. This is reached in all the Nordic countries, whereas Ireland spends only 0.2%-0.4% annually. Increasing childcare expenditure to just 1% of GDP would provide a similar level of subsidy as in Scandinavia and mean an immediate increase of around €1.5bn per annum.

Despite the huge costs for families, and in stark contrast to colossal profits being raked in by private companies the predominantly female workforce in the childcare sector are some of the most exploited workers in the country. Low pay, long hours and highly pressurised work places are the norm.

Childcare workers in state-funded schemes do not fare much better and can earn as little as €5,700 a year according to an unpublished report from the Irish Congress of Trade Unions. The report says significant improvements in pay and conditions will be “central to the implementation of any high quality model of early care and education”.

Another sinister symptom of the continued failure to invest in a quality and affordable childcare system is the 20,000 Irish households employing au-pairs to look after children and clean homes. The average au-pair is paid just €100 for a 40-hour working week. And reports show that many of these primarily female migrant workers are consistently exploited and denied even basic employment rights.

The childcare sector in Ireland is the epitomy of capitalism, what is a fundamental need being used to extort massive profit from ordinary people whilst exploiting some of the most vulnerable workers. The pursuing of the profits and unpaid taxes of multinational corporations like Apple that reside here could raise billions to invest in infrastructure and public services with childcare being a key feature of this.

Childcare should without delay be made affordable or free, and based on the needs of children and parents, not profit, but ultimately childcare and early education should be an essential public service, linked to child development and the education system.