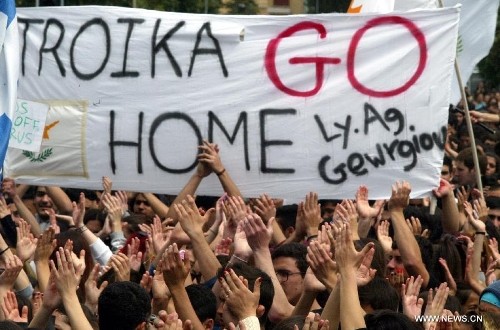 This rotten system must go- Join the socialists today

“Accumulation of wealth at one pole is… at the same time accumulation of misery, agony of toil, slavery, ignorance, brutality, mental degradation, at the opposite pole” – Karl Marx

The richest 1% global elite own more wealth than the other 99% of the world’s population. Let’s reflect on that for a moment. There has never, in the history of capitalism itself, nor in any other form of class-divided society in human history, been such a wealth-and-power gap between the ruling class and everyone else.

Even the genius, Karl Marx whose analysis of the nature of capitalism predicted such an obscene wealth polarisation could hardly have envisioned a world in which the most luxurious and expensive hotel suite in the world costs more than an annual wage for the vast majority of workers, $80,000 per night (in the Royal Penthouse Suite, Hotel President Wilson, Geneva), while globally nearly one billion people languish in slums.

The drive for profit at the heart of capitalism as a system causes untold human misery. It’s the for-profit approach to housing that shuns human need and has created a housing and homelessness catastrophe in this state. Two hundred more families renting in an estate in Tyrrellstown, West Dublin, face eviction and homelessness because the developer’s debts were sold to a vulture fund.

Climate change crisis threatens the future of humanity. The short-term drive for profit that keeps fossil fuels burning is an anathema to environmental protection. The fact that capitalism is organised on the basis of nation states that compete against each other in the interests of their respective indigenous capitalist classes, is an absolute block on a real global emergency plan for a wholesale shift to renewable energy – the only viable solution to halt climate change chaos.

In Ireland and globally, we need a challenge to the existence of a 1% elite. Such an anti-capitalist challenge is precisely a struggle as to who has the right to own and control the wealth in society. All those who have to sell their labour to survive – ordinary workers the world over – are the ones who create the wealth.

The 1% elite – the capitalist class, practice grand larceny in the form of profits – the unpaid labour of working people. That’s why, from the struggle against water charges, to the Luas workers’ firm stance, such working class movements are harbingers of progress – every cent won is a dent in the supremacy of the “masters of the universe”.

For lasting change, a working class movement needs to be organised around socialist ideas. Socialism means that the major banks, corporations and economic levers in society, wealth and the means of producing it, must be taken out of private hands and instead be owned, controlled and run democratically by the working class majority.

A world to win

The 1% has a lot to lose. And it has states that protect its interests, as evidenced by the criminalising of Jobstown protesters. It has a propaganda machine in the form of the mass media that worships at the altar of market greed and preaches that “there is no alternative”. But as Karl Marx professed, we have a world to win. Organising right now to build a razor-sharp socialist political force, in Ireland, and globally, is the most effective way to do this.

Join the Socialist Party today and become part of a global socialist movement and political organisation, with sister parties in countries on every continent.