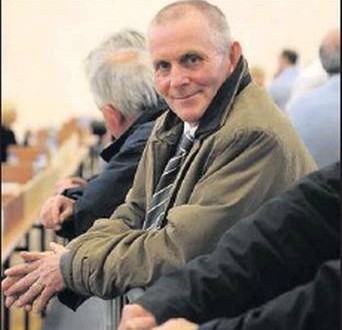 On 7 March Comrade Frank Gallagher passed away following a long illness. Frank dedicated his life to fighting with and for working class people. He was born and raised in Drogheda, County Louth. Following study at the Crawford Institute in Cork he began his working life at the ‘Drogheda Independent’ newspaper and settled down to rear his family.

In the 1980’s he was a prominent activist in Drogheda in the battles against water charges. He was also an active member of his union throughout his working life as shop steward, conference delegate and executive member. During the late 1980’s Frank was heavily involved in the efforts by the Graphical Paper and Media Union to assist the English printing unions, who were then under full scale assault from the state, Thatcher’s government and Murdoch’s press empire.

Travelling regularly between England and Ireland, he played an important role in frustrating the Tories’ attempts to sequester the assets of the National Union of Miners (NUM) by helping safeguard union funds. In one comical instance he was seated beside arch-capitalist Peter Sutherland on a return flight from London.

Around this time Frank sought but did not find a political home in the Labour Party and, then, the Workers Party. In a sign of his political acuity Frank saw through both entities in the late 1980’s and he remained politically unaffiliated until he joined the Socialist Party in 2000. Once he joined the Socialist Party Frank had found his political home and he remained a loyal member to the end. In the early 2000’s Frank was a key organiser in the struggle against the bin tax in Drogheda. Along with other activists, he fought this battle in the estates of Drogheda to the bitter end, provoking at one stage a politically motivated six week work suspension for Frank. For two years he followed the council’s bin trucks and dumped rubbish into them in defiance of the council and the government. He was a key organiser of the huge rally against bin charges in 2002 which drew almost 10,000 onto the streets of Drogheda.

Despite the government prevailing on that occasion Frank was undefeated and he threw himself into organising the Socialist Party in Drogheda. He knew instinctively that workers need a militant fighting political organisation to defend their interests and Frank worked tirelessly to establish the Socialist Party in Drogheda. He ran as a Socialist Party candidate for Drogheda Borough Council in 2004 and narrowly missed out. However, he kept working away, campaigning to retain local cancer services among other campaigns, and in the 2009 local elections he won a seat on Drogheda Borough Council. He was very proud of the fact that he was the first Socialist Party elected representative outside Dublin and Cork. As a local Councillor Frank worked with local communities on improvements to their areas but also on building to fight the intensifying attacks on working class people as the economic crisis worsened following the crash on 2008.

On Drogheda Borough Council Frank held the bourgeois parties’ feet to the fire. He relentlessly attacked the local ‘Pact’ which was a stitch up between Fianna Fáil, Fine Gael and Labour, who shared out the Mayoralty, and other offices, between them. He was an implacable opponent of cuts to council budgets and never voted in favour of any of the cuts budgets proposed during his tenure as a Councillor.

In 2011 there was a sharp upturn in the class struggle with the government’s announcement that from 2012 they would implement a €100  household charge. Frank, along with Socialist Party members across the South of Ireland, threw himself into organising the fightback. In February 2012 Frank spoke at the launch of the Campaign Against the Household and Water Tax (CAHWT) in Drogheda. Days later he was diagnosed with a particularly aggressive form of cancer and he underwent an equally aggressive and invasive regime of treatment. Despite this, following major surgery and intensive chemotherapy, by late 2012 Frank was back as a Councillor and activist against the household tax.

As the only elected representative in County Louth advocating mass non-payment and boycott of the household charge and property tax, Frank spoke at public meetings, dropped leaflets, manned stalls and attended demonstrations throughout late 2012 and early 2013, despite constant pain and physical discomfort. Unfortunately, in May 2013 he was made aware of the fact that the local property tax had been paid on his family home, without his consent or knowledge. Immediately upon receiving this news Frank resigned his seat on Drogheda Borough Council, acutely aware of his responsibility to be consistent as an advocate of non-payment. Despite resigning his seat Frank’s level of political activity barely dipped. He was heavily involved in the Anti Austerity Alliance election challenge in Drogheda in the Spring of 2014. Later in 2014 he became involved in the ‘We Won’t Pay’ campaign against the water tax and was a speaker at many of the campaign’s street meetings in Drogheda during the Spring of 2015.

Frank served as Secretary of Drogheda Trades Council for many years. He was also a labour historian of Drogheda and an experienced tour guide. A regular contributor to the journal of the ‘Old Drogheda Society’, on the history of the labour movement and workers’ struggles in the town, his article in the 2014 edition of the journal ‘Drogheda’s Red Flag Revolt’ was one of many memorable pieces. In this article he set out how local ITGWU organiser, Eamonn Rooney, had defied the British authorities’ ‘Defence of the Realm Act’ in 1920 to organise a May Day parade through the town. Frank was a regular attendee at May Day parades in Dublin and Belfast over the years.

Frank’s intimate knowledge of Drogheda’s history was to lead him to his role as a guide to the many walking tours of the town held by the ‘Boyne Valley Walking Tours’ festival from 2012 onwards. Frank’s employment by the Millmount Centre in Drogheda was also a great source of joy to him. Socialist Party members on a canvass or leaflet drop with Frank could often expect a brief lecture on the history of whatever part of the town they were in. I remember a ten minute break in a leaflet drop several years ago while Frank pointed out the exact spot where Oliver Cromwell’s forces first breached the walls of Drogheda on 11 September 1649.

He was an enthusiastic supporter of the Celtic languages and had a keen interest in the Manx language and the history and heritage of the Isle of Man. In October 2015 he was made Honourary Life President of the ‘Old Drogheda Society.’ And the following month Socialist Party comrades from across the island of Ireland converged on Drogheda for a celebration of Frank’s contribution to the trade union and socialist movement in Ireland. Frank’s final journey was to Dromin cemetery in County Louth. He was buried surrounded by his family, many friends from the trade union movement and his Socialist Party comrades.