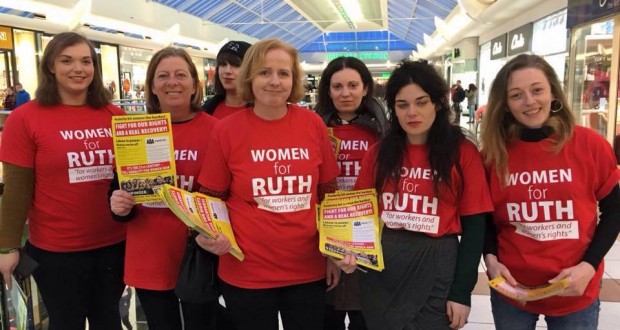 Election result Dublin West – Sinn Féin blame everyone but themselves

The Socialist Party released a statement on Tuesday 1 March answering the ridiculous accusations that Ruth Coppinger caused Joan Burton to be elected instead of Paul Donnelly: https://socialistparty.ie/2016/03/dublin-west-socialist-party-responds-to-attacks-on-aaa/. Unfortunately as the attacks have now being repeated by some leading trade unionists, we set the record straight again:

“Sinn Féin is smarting after some disappointing election results and is attempting to cover-up its own responsibility for these by blaming others.

At the same time it is trying to bully into silence anyone to its left who show the growing gap between their anti-establishment rhetoric and the limited change their policies actually represent.

A Millward Brown opinion poll for Dublin West was published by the Independent on 11 February. It indicated:

The only substantial differences between the two were in the votes for Sinn Féin and Labour.

As the poll indicated that Leo Varadkar would be elected, he felt the need to issue a leaflet that he was not safe and needed the number 1 votes of his supporters.

In particular the poll indicated that there was a battle between Ruth Coppinger and Joan Burton for the last seat.

Naturally the AAA responded. This included producing a leaflet on the theme of a battle between Ruth and Joan Burton. Labour also produced a letter/leaflet saying it was a battle between Joan Burton and Ruth but also Sinn Féin, indicating that they were targeting those who may have been leaning towards Sinn Féin too.

It seems Sinn Féin did not make a significant response to the poll or to the initiatives that other parties took.

Based on their moderating of their policies and by their actions in the north, the AAA and the Socialist Party believe it is very likely that Sinn Féin will try to compromise with the system like Labour has done. In all honestly we cannot endorse a party if there is a real prospect that they could implement policies that would hurt working class people when in power.

However, Sinn Féin accuses the AAA in Dublin West of both being unfairly critical of Sinn Féin but then at the same time of cosying up to Sinn Féin supporters so as to trick then into switching their vote to the AAA. Common sense dictates it is simply not possible to do both.

The AAA made criticisms of Sinn Féin’s policies and approach in leaflets and on the doorsteps so there was no question of people being tricked. We advocated people vote for Ruth Coppinger and the AAA because, in our opinion, they represent the best option for working class people. Anyone who was really supportive of Sinn Féin would not have accepted our arguments and would not have changed their voting intention. The votes the AAA got were on a fair and political basis.

The problem that Sinn Féin and its supporters have is not with dirty tricks but with the fact that the AAA actually dared to criticise their policies, approach and record and that we dared to advocate that Ruth and the AAA are the best option for working class people in Dublin West.

As the election approached, support sapped away from Sinn Féin. The Thomas “Slab” Murphy affair and some weak performances in the media had an effect, but crucial was that Sinn Féin moderated their policies. They accepted the establishment’s “fiscal space” con and then their proposals on housing, the minimum wage and public services contained only limited change and failed to inspire people.

Crucially their openness to go into coalition with Fianna Fáil, mentioned on a number of occasions by Gerry Adams, Padraig MacLochlainn and others, added to people’s doubts about their approach.

Sinn Féin was in an extremely strong position to win a seat in Dublin West. That they failed to secure it but instead allowed Joan Burton to take the last seat is their own responsibility and no one else’s.”