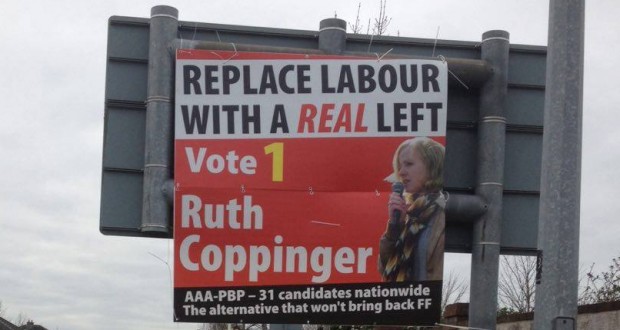 Unfortunately, since the count concluded in Dublin West on Saturday night, there has been a campaign of misinformation and lies putting forward the incredible idea that Ruth Coppinger, Joe Higgins and the AAA campaign unfairly scuppered Paul Donnelly and caused Joan Burton to be re-elected.

There has been misinformation and hostile postings by prominent public figures on social media. There has also been some vile and vitriolic attacks including racist, misogynistic and personalised abuse which actually amount to an incitement to hatred.

We are not going to respond to the gutter comments and believe they should be roundly condemned. Instead we will concentrate on the facts and trust that those with an open mind will see that the charge of “dirty tricks” against the AAA and the Socialist Party is baseless.

The truth is that we share many people’s dismay at the election of Joan Burton and while we have important political differences with Paul Donnelly and Sinn Fein, we would have preferred his election over that of the former Tánaiste who was directly responsible for the implementation of savage austerity measures.

The main allegations that are made against Ruth and her campaign are that:

1. We lied about Sinn Fein’s policies, specifically their openness to go into government with Fianna Fail

2. We tried to hoodwink or cheat Sinn Fein supporters into voting number 1 for Ruth on the basis that Paul Donnelly was safe or had been guaranteed a seat already

3. We advocated that after people vote number 1 for Ruth they don’t transfer to Paul Donnelly, but instead vote number 2 for Joan Burton

4. Ruth’s surplus went to Burton and got her elected over Paul Donnelly

The Socialist Party and the AAA make no apology for raising in the election campaign that Sinn Fein was preparing the ground to go into coalition with Fianna Fail. It isn’t a lie or a dirty trick if it is the truth and our comments are based on the positions put forward by Sinn Fein leaders themselves.

On September 16 2015, Gerry Adams was quoted in the Irish Times saying Sinn Féin would go into coalition with “whoever is successful in the election”. The following month on October 18 then Sinn Féin TD Padraig MacLochlainn told The Sunday Times that Sinn Féin should consider forming a government with Fianna Fáil and Labour.

For now, in the immediate days after the election, Sinn Fein is indicating it won’t go into government, but in the months before they indicated on many occasions that they were open to being in government with both Fianna Fail and Labour.

From the point of view of ordinary working class people who need a real alternative, Sinn Fein should rule out any involvement with any of the establishment parties on any basis. Unfortunately it seems they won’t do this.
In election campaigns you outline your own views and policies but it is completely legitimate and correct to also criticise the positions of others once that is done factually. Sinn Fein may not like the AAA doing this but far from lying, we are telling the truth to working class people.

A leaflet from Joe Higgins that was distributed in Dublin West is produced as evidence that we tried to trick Sinn Fein supporters into voting for Ruth; the leaflet (attached) actually proves the exact opposite. 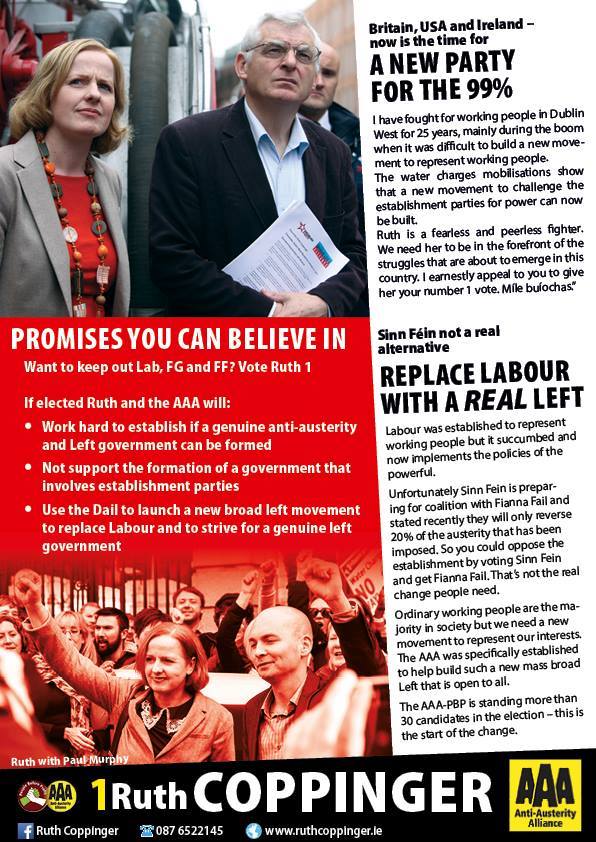 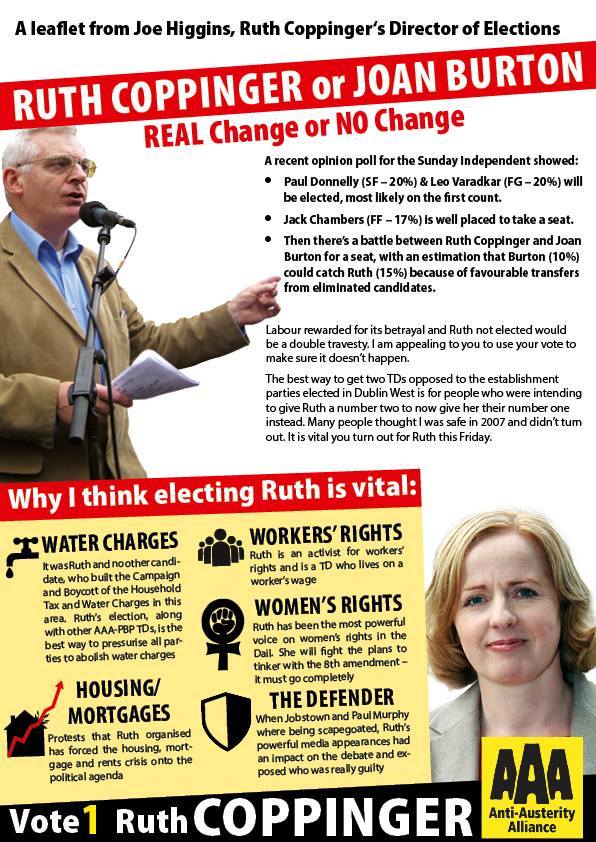 Our leaflet factually explains the findings of a Millward Brown opinion poll for Dublin West that was published in the Independent on Thursday, February 11

This was a professionally conducted poll, with more than 520 people in the area interviewed. The leaflet comments that the poll indicates that Sinn Fein was on 20% which we state correctly, is enough to get elected, most likely on the first count.

However, the main point of the leaflet was that on 15% of the vote Ruth was not safe and there was an appeal that, “people who were intending to give Ruth their number two to now give her their number one instead.” The leaflet went on to explain why we believed Ruth was the best candidate.

The opinion poll, coming with less than two weeks to polling day, was an important event in the election in Dublin West. There is no doubt that it was an accurate snapshot of opinion at that time — the only real differences between what it indicated for all the main candidates and the actual result were that Labour’s vote went up and Sinn Fein’s vote went down.

Clearly Ruth Coppinger’s position was not safe and she could have been caught by Burton if she increased her vote or if she got better transfers from other candidates. The only way to make Ruth safe was to try to get more commitments for number 1 votes.

Some of the comments attacking us seem to take offence or think it is outrageous or sectarian that we went about the task of talking to people who at that time were not intending to give Ruth their number 1, with the view to try to convince them that Ruth and the AAA deserved their number 1 vote the most.

Implied in the attacks on us is that it is wrong to engage, discuss or argue with people if they initially indicate it is their intention to vote for other candidates or even if they are considering other candidates.

We only engage with people who are open to talking and discussing and then of course we are going to try to outline reasons why they should switch from whoever they had in mind to instead vote number 1 for Ruth. All parties do this and as we think Ruth is the best candidate/representative for working class people and as we have important political differences with all the other candidates and parties, it is obvious that we would redouble our efforts if we thought Ruth’s seat was in danger.

Parties or candidates don’t own voters or their voting intentions and people are free to make up their minds and to change their minds in the course of an election campaign. That is fundamentally what an election and canvassing is about.

We stated the facts of the poll and what they implied for the coming election in our leaflet and in many conversations on the doorsteps. However, counter to the claims of Paul Donnelly, it was not the policy of our campaign and neither did Ruth Coppinger or Joe Higgins ever advocate that canvassers try to con people that Paul Donnelly was already safe or in some way was already guaranteed a Dail seat.

The accusation implies that ordinary people are just gullible fodder. People know that the casting of votes takes place on a particular day and that in this election that was taking place on Friday 26 February and not before, that nothing is guaranteed in advance.

It is not the policy or approach of the AAA or the Socialist Party to ask people to switch their number 1 votes on an apolitical basis or by supposedly giving bogus guarantees. We engage in an honest way and if, after a conversation, someone is firm or more supportive of another campaign than ours, we respect that and move on.

If someone was positive towards both us and Sinn Fein, having made clear why we think Ruth is the best candidate, it is completely legitimate if our canvassers state for the person’s consideration that the poll indicated that if a number of people shifted to Ruth, that it was entirely possible that both Ruth and Paul Donnelly could be elected.

The fact that both Ruth and Paul Donnelly were not elected is not our responsibility. It is not the job of our campaign to secure Paul Donnelly’s election; our job was to secure Ruth’s election on a principled basis and that is what we did.

The real question is what did Sinn Fein do in the last week and a half of the campaign to try to ensure they maintained their support and to counteract what other campaigns were doing to advocate for their candidates given that the publication of the opinion poll inevitably made the election more competitive?

We don’t accept that our leaflet or campaign used the poll to try to con people. However, given the nature of the accusations that are being thrown around we feel compelled to show that Sinn Fein in Dublin West has double standards on such issues. Below is a leaflet that they distributed in the By-Election in 2014 in which they manufactured a completely bogus argument where they used part of a poll about the European Elections to imply that in Dublin West Sinn Fein significantly out polling the Socialist Party and Labour. 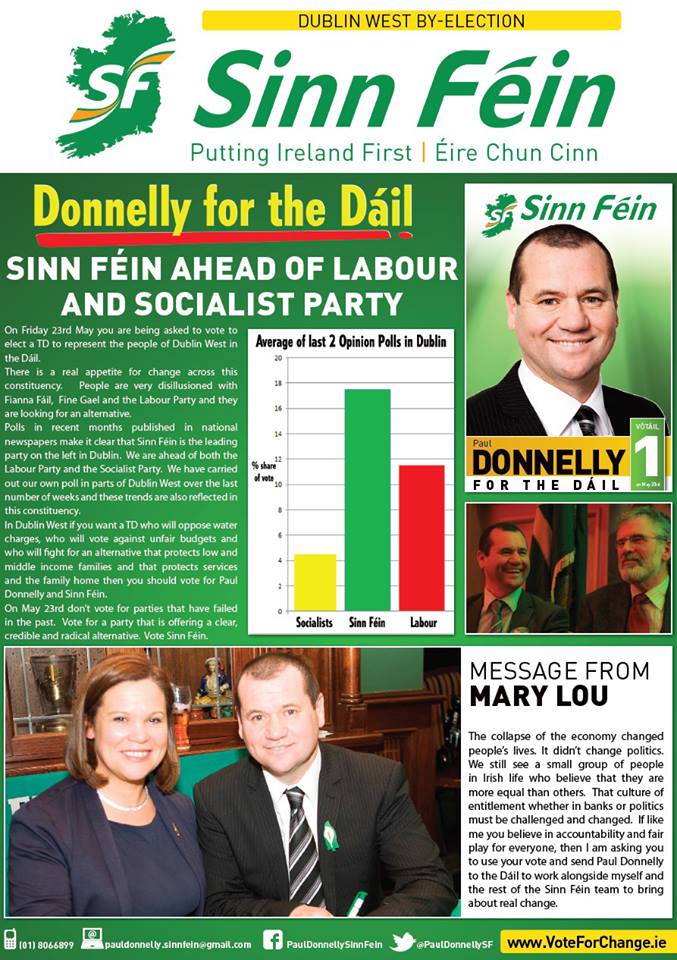 In no circumstances and on no occasion did anyone from Ruth Coppinger’s campaign advocate that people should vote number 2 for Joan Burton as a way of trying to stop the election of Paul Donnelly. To most people the notion must seem ludicrous and it is ludicrous.

So we would advocate support for and want to get elected the person who is in large part responsible for bringing the very serious criminal charges of false imprisonment against residents of Jobstown, including our members and AAA TD Paul Murphy, which could result in his debarring as a TD, just because we wanted to stop Paul Donnelly getting elected?!

We have taken a principled opposition to the Labour Party since that party became part of the capitalist establishment in this country.

Rather than accuse us of softness on the sell-out Labour party, Sinn Fein members and supporters should reflect on the statements that were issued by many Sinn Fein TDs late last year declaring their openness to go into government with Labour led by the very same Joan Burton we are accused of supporting.

After the fifth count in Dublin West, which was the combined distribution of Roderic O’Gorman and David McGuinness’s votes, Ruth Coppinger and Joan Burton were deemed elected.
At that point Ruth had just over 150 votes over the quota but this surplus was not distributed because it could not have helped Paul Donnelly bridge the gap between him and Joan Burton which was 918 votes at that point.
So Ruth’s vote played no part in the election of Joan Burton, both Ruth and Joan Burton were elected by getting transfers from the Green and Independent candidates.

The clear reality is that Joan Burton was able to get elected over Paul Donnelly because she increased her first preference vote in the time between the Sunday Independent opinion poll and the election itself, whereas Paul Donnelly and Sinn Fein lost support during the same time frame. Burton also did better on transfers which meant Paul Donnelly wasn’t able to catch her in the course of the count.

We hope this statement clarifies the facts of the situation and demonstrates that the approach that the AAA and the Socialist Party took during this election campaign was completely proper and above board.

We are the victims of a campaign of misinformation and half-truths. If the misinformation continues, either on social media or by word of mouth, we believe that ordinary people will see it for what it is, disgraceful slander and abuse that has no place in political campaigning.