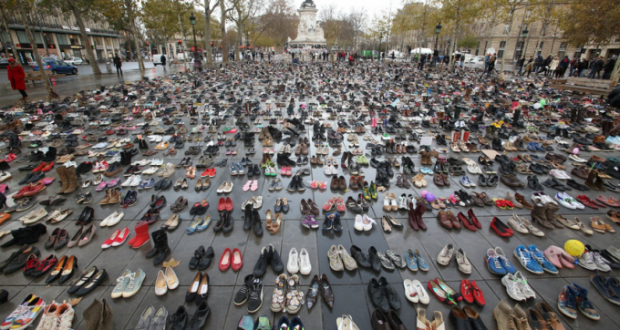 By Arne Johansson. From Offensiv, newspaper of Rättvisepartiet Socialisterna (sister party of the Socialist Party in Sweden)

An historic “turning point for the world”. This is how US President Barack Obama and other top politicians referred to the 31-page climate agreement adopted by196 governments in Paris. Some major environmental organisations and the media made similar assessments.

The head of the UN Environment Programme, Achim Steiner, even claims it is the most important international agreement ever concluded. If only it was in fact the kind of agreement that could avert the runaway global warming that now threatens all human civilisation on the planet.

Unfortunately, such claims in fact represent a huge “green washing” of reality. As the 74-year-old doyen of climate science, James Hansen, says, ”It’s really a fraud, a fudge without action, just promises”.

The agreement is based on voluntary national contributions or INDCs (Intended National Determined Contributions) submitted from 186 countries. This method has been adopted since the attempts over more than twenty years to get legally binding agreements has been abandoned. These INDC’s point towards a temperature increase of 2.7°C above pre-industrial levels, according to the UN . Even this would require, according to the agreement text itself, “much greater efforts to reduce emissions”.

In accordance with these “national contributions”, annual emissions will continue to grow very strongly in a majority of less developed countries. In the richer countries of the EU and the US, who are responsible for most of the accumulated concentration of green house gases in the atmosphere, they would decline only marginally. Therefore, from 2030 extremely dramatic adjustments are needed in a very short time to achieve the net zero emissions required for a maximum global warming of 2 °C, even with just a 50 percent probability of reaching the targets.

Climate scientists say there is a remaining ’carbon budget’ of 1,000 gigatons that can be used to achieve 2°C. Already in 2030, 723 gigatons of that will be gone, according to the most optimistic of the UN scenarios regarding the INDC’s. If emissions after 2030 continue at the same rate, the rest would be exhausted within a few years.

The politicians have managed to sell a positive spin on the agreement mainly because all governments have now been forced to at least pay lip service to the issue of global warming. The most crude climate deniers are now more or less limited to the Republicans in the US Congress. However, the oil and gas industry as well as the world’s governments, are trying to hide behind a green disguise.

Capitalist world leaders hold out the pious hope for the rapid technological development of renewable energy sources like solar and wind and the promised revisions of the INDCs every five years. This, they claim, will lead to progressively more stringent measures. It is an attempt to conjure up the illusion of an unstoppable momentum, lightly seasoned with their surprising stepping up of the goal of limiting global warming to “well below” 2°C and even to pursue efforts to limit temperature increase to 1.5°C.

With the tactical manoeuvre of launching the 1.5°C target, it was finally possible to buy the submission of all governments except Nicaragua. The agreement accepts the US’ refusal to agree to compensate the small low-lying island states and other poor countries for irreversible climate damages. There is only the meagre promise of climate aid to developing countries of just $100 billion a year from 2020. The oil producing states and many other governments were successful with their refusal to accept a proposed target to actually phase out carbon dioxide emissions by 70-95 per cent by 2050.

The compromise negotiations on this were led by Sweden’s and Bolivia’s environment ministers.

The text of the Paris Agreement shows that the Canadian activist and author Naomi Klein was right in sharply criticising the agreement before thousands of activists demonstrating in Paris on December 12.

She declared that the agreement does not even mention the word “fossil fuels”. All the statements on the fast shrinking “carbon budget” needed to reach 1.5°C or even 2°C and the need to phase out fossil fuels within a certain time, have been replaced. The agreement’s vague ambition is to achieve a balance for “the second half of the century” between the antropocene emissions caused by people and the uptake of carbon dioxide in so-called carbon sinks. This testifies to the decisive influence behind the scenes from both the coal and oil industries as well as financial interests.

The result of the negotiations is a lethal cocktail of reliance on market mechanisms and unproven technological solutions to suck carbon dioxide out of the atmosphere. There was no mention of political decisions and the state and global planning needed to stop the extraction of 80 percent of known reserves of coal, oil and gas. Or the need to begin a planned conversion to fossil-free communities in balance with nature.

Even Shell’s own chief adviser on climate, David Hone, provides in his blog a concerned critique of the “limited substance” on how to achieve the 1.5°C target. “Even if emissions were to stabilise at the level we have seen in 2014-2015, the threshold of 1.5°C would already be reached in 2028”, he writes.

A realistic chance of achieving the 1.5°C target would, in Hone’s calculations, requires substantial global emissions cuts almost instantly. This would have to be combined with measures to achieve zero global net emissions within 40 years, followed by negative emissions through the capture and storage (CCS) in the order of 10 billion tonnes a year for the rest of the century.

This, according to Hones and the vested interests of the fossil industries, will have to includes massive dependence on CCS to reach net-zero emissions and afterwards to capture the over-accumulation of greenhouse gases that has occurred in the atmosphere. CCS is not currently used because of both economic reasons and due to people’s concerns. In addition, this would require a complete remodelling of the energy system in just 40 years.

“This would include the entire industrial system, all transport and electricity generation. Alternatives must be found to many petroleum-based products and a new large-scale synthetic hydrocarbon processing would be needed for sectors such as aviation and shipping. While agriculture has a largely bio-based release system, there is still need for a solution for agricultural emissions of methane”, writes Hones. “Solutions must (also) be found for all other sectors, which in many cases means electrification and therefore means a significant additional burden on a rebuilt system for power generation. Air transport would be particularly difficult”.

What is not clear from Hones calculation is to what extent it is based on a continued exploitation of the coal, oil and gas that must remain in the ground, with a total ban on new fossil-dependent infrastructure.

In the grip of Big Oil

Oil and gas companies such as Shell, ExxonMobil, Total and Statoil has the UN climate circus in its grip. However, they are now even pushing the idea of a carbon tax. This is related to their attempt to stimulate investment in CCS techniques that would allow them to continue more or less unhindered their activities as before, ie “business as usual”. Despite the fact that the world will have to become completely free of carbon emissions, they have even been extremely successful in promoting gas as a “clean energy”. Gas is supposed to produce just half the emissions of the coal sector, if the release of methane in the process of fracking is forgotten about.

Instead of a target of a world where all energy must be renewable, big business and their lobby groups have managed to establish vague goals in the agreement that aims for “net-zero” emissions some time in the century’s second half. A working group of the Intergovernmental Panel on Climate Change (IPCC) has estimated that this may demand bio plantations of trees and biomass on a surface upwards of twice Africa’s arable land.

The Paris agreement is totally free from any state and global planning and regulation elements, which also have been anathema in the capitalist world’s neoliberal and international trade deals since the fall of the Berlin Wall – from the WTO and NAFTA to the TTP and TTIP. It is based entirely on market solutions and untested methods to suck carbon dioxide out of the ground. Kevin Anderson, the former head of climate research at UK Tyndell Centre, called this “a dangerous distraction from the strict regulations and standards required” for “revolutionary changes (of) the political and economic hegemony “.

On the website, Carbon Market Watch, they even talk of a “seismic shift” in terms of robust rules for coal market solutions and a new mechanism for developing and linking emissions trading across borders. This goes beyond the single, project-based investments in offsets as was agreed in the Kyoto Protocol’s Clean Development Mechanism (CDM).

The European emissions trading under the Kyoto Protocol was a miserable fiasco. Despite this, now not only the EU and the US, but also several new major emitting countries including China, Russia, Brazil and South Africa are ready to embrace an emissions trading schemes.

A revolution in energy and society

During the final day of negotiations in Paris, climate activists from around the world managed finally to push the French government to lift the ban on demonstrations in place since the terror attacks on November 13th. Attention was drawn to the continued and expanded global struggle from below that is needed to save the climate.

Just as Naomi Klein and many other climate activists advocate, this demands that in order to seriously challenge the corporations and governments that stand in our way, we have to build a massive movement for a change of the system. The epic fight against Keystone XL is a recent example of how important, albeit temporary, victories can be won even against powerful business interests. It was done through a combination of “blockadia” style struggles. Climate activists came together with indigenous and other local communities, as well as with various social movements, youth, and trade unions who were prepared to fight for workers’ rights and green jobs and against austerity. In the protest forums linked to the COP21 event, examples were given of how local struggle in cities and regions have gained local control of energy production based on renewables, as in several parts of Germany already.

All this sounds good. But, as the CWI flyers, pamphlets, discussions and meetings in Paris explained, none of this is enough. Scientists tell us there is only a short time left to prevent run-away warming and implement a revolutionary conversion to renewable energy. Massive investment is needed in new infrastructure. The rebuilding of society demands new mass socialist parties that are prepared to lead and coordinate a working class based social revolution.

The climate crisis and the other planetary branches that capitalism is cutting at the same time helps us to clarify what kind of transitional demands for a socialist society in balance with nature are required – what is needed to achieve a planned transition from motorway mass car-driving and unnecessary domestic flights to railways and public transport, homes with minimal heating requiremenmts and maximum energy-efficient industries. We need a radical redistribution of power and wealth that also can limit the obscene private consumption by the very rich. This in turn requires democratic and socialist planning that cannot be implemented without the nationalisation of banks, energy companies, construction and automotive industries, transport and all big firms under the control and management of democratically elected representatives of workers.