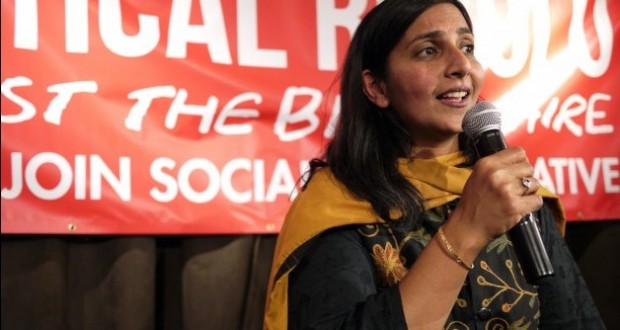 Stunning victory for socialist in Seattle

The amazing victory of Socialist Alternative candidate Kshama Sawant in the election to Seattle City Council is definitely a clear indication of the desire for a genuine alternative to capitalism on the part of working class. Not only was she elected in 2013, she was re-elected too at the beginning of November!

She has been completely unapologetic in her socialist views and has been the face of anti-corporation politics in Seattle. Kshama Sawant is a councillor who represents ordinary people. She represents tenants, workers, people of colour, LGBTQ people, immigrants and indigenous people.

The campaign had 600 volunteers and the support of 30 union organisations and many other progressive organisations including a number of trade unions. Unlike other candidates, Kshama Sawant’s campaign was not funded by corporations and all of the donations came from working class people. However, the campaign was seriously attacked by the big businesses who injected funds into the campaigns of her opponents.

Big business goes on the attack

These big businesses included Amazon, real estate and landlord lobbies, six conservative council members and even some Republican millionaires. Kshama has played a leading role in the successful battle for a $15 minimum wage in Seattle, so it’s no surprise that the Washington Restaurant Association gave thousands of dollars in donations to Kshama’s opponents. Her election campaign showed what she stood for and what people demanded; putting the needs of people before the needs of big corporations.

Kshama Sawant has been described by the media as “the most important socialist in America not named Bernie Sanders” and her victory in Seattle paired with the huge support gathering behind Bernie Sanders’ presidential campaign definitely signals the demand for an alternative to corporate politics. Other candidates from the Presidential election campaign are not going to represent the interests of the 99%. They will represent the capitalist big businesses from which they get their funding from.

Like Kshama, Bernie Sanders refuses to accept donations from big businesses, which is something the corporations will use in an attempt to defeat the campaign. There’s an opportunity to use the stunning victory of Kshama Sawant’s campaign and the momentum behind Bernie Sanders in the Presidential election to offer a genuine socialist alternative and give people hope and courage.

However, Sanders will need to break with the corporate Democratic party machine. The re-election of Kshama Sawant was a huge victory for the left in the US and really illustrates the demand for change.