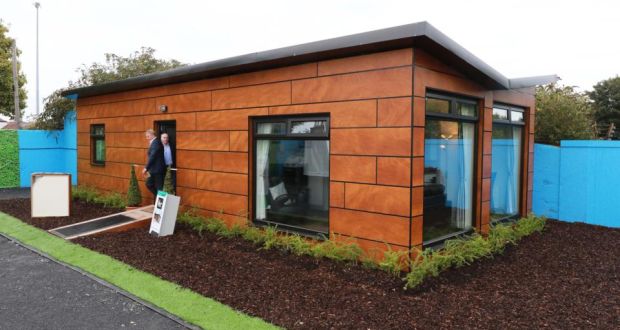 It’s a true mark of the desperation brought about by the housing crisis that prefabricated or “modular” homes are seen as a step up for many of the thousands of people currently homeless in Dublin and enduring emergency accommodation in hotels, hostels or B&Bs.

But for the thousands more of families who are not homeless but are in dire overcrowding situations, the modular homes being talked up as an interim solution might seem a less bad option.

Councillors, council officials and the media were demonstrated six different types of modular unit in September and essentially given a sales pitch by each of the manufacturers, one which is a subsidiary of Siteserv (proprietor Denis O’Brien!).  What struck me immediately from the pitches was the ultimate false economy of going down this route as a sticking plaster solution.

The price range went from €30,000 at the lower end to almost €100,000 for units we are told we need only for a few years but can last decades. Dr Lorcan Sirr, lecturer in housing studies in DIT estimates that the average cost in labour and materials to build an actual house on council owned land that one would expect to last well over 100 years is €160,000.

The starting point of resolving the crisis of homelessness should be liberating all empty units in the Dublin area and readying them for use by people who need them. Such units include voids (council owned vacant units), NAMA owned property, as well as private blocks for sale. But this is not enough, we need a massive house building programme, a programme which is not on the current council’s agenda

Instead Dublin City Council’s Housing Special Policy Committee has come out in support of proceeding with these modular units and identifying sites around the city to place them. Councillors from the establishment parties have resisted the point made by activists such as myself that acquiring these units needs to be tied into a firm commitment for house building. These politicians have bought into the line that Troika deficit rules prevent the council from raising the funds to build.

Even where the council has plans for substantial development on land it owns – such as the sites in Belcamp and the Oscar Traynor Road in Dublin’s North East, where together 1,100 unit are to be built by the end of 2017 – they are bringing in private developers who do the work and take a cut for themselves, meaning that only around 200 units will meet the social need.

Such a lack of seriousness about addressing the crisis means that there is a real danger that modular homes could become a long term arrangement like the prefab classrooms of the past.