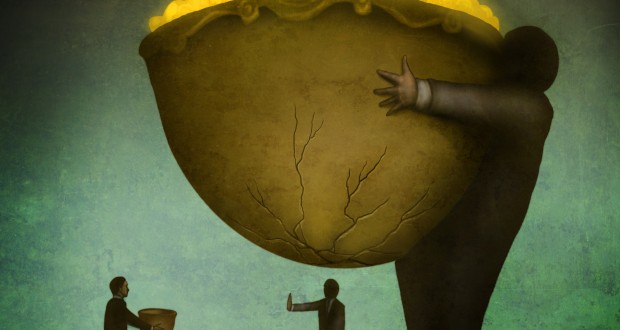 Simply obscene – the wealth of the 1%

The rallying cry of Occupy Wall Street that sprung up four years ago, “We are the 99%” was prescient and profound, writes Laura Fitzgerald. The Oxfam Wealth Report of 2015 predicted that next year, based on current trends, the richest global 1% will own more wealth than the other 99% of the world’s population.

Wealth inequality is a defining political issue of this era, as illustrated by the social movements around Bernie Sanders in the US and Corbyn in Britain who have attracted hundreds of thousands captivated by their popular demands to counter decades of erosion of the “social wage” – demands for free health and education; and also because they’ve highlighted wealth inequality.

On the front of Sanders’s website he rails that “America has more wealth and income inequality than any major developed country on earth, and the gap between the very rich and everyone else is wider than at any time since the 1920s…. There is something profoundly wrong when the top one-tenth of one percent owns as much wealth as the bottom 90 percent.”

There most certainly is something profoundly wrong. Gross and obscene wealth inequality has been exacerbated in the context of the global crisis of capitalism. In Ireland, in the recovery for the rich, the wealthiest 300 people have increased their assets by over €30bn between 2010 and 2015. The richest 300 now hold €84.4bn (Sunday Independent Rich List, March 2015). The largest number of billionaires in Latin America live in Brazil – there are 54. Half of all children in Brazil, that’s 30 million children, live in poverty.

India’s capitalist boom has been very good for the 100 richest individuals who own assets equivalent to one-quarter of the GDP, in a country of 1.2 billion people. Arudhati Roy has written about the cruel horrors of this boom, the repressive Indian state and the farce of the mendacious cliches about a growing middle class in “the world’s largest democracy”. She writes, “In India, the 300 million of us who belong to the new, post International Monetary Fund (IMF) “reforms” middle class – the market – live side by side with the spirits of the netherworld, the poltergeists of dead rivers, dry wells, bald mountains, and denuded forests; the ghosts of 250,000 debt-ridden farmers who have killed themselves, and of the 800 million who have been impoverished and dispossessed to make way for us. And who survive on less than twenty Indian rupees a day.” (Capitalism: A Ghost Story)

The robbing of wealth

Karl Marx 150 years ago in his study of capitalism illustrated how inequality and the profit-system, are intimately intertwined. Marx showed how new wealth is created by the labour of workers, and how inherent in the capitalist mode of production, is the robbing of wealth in the form of profits – profits as the unpaid labour of the working class.

The fact that across the EU since 2009, the number of full-time jobs fell by almost 3.3 million, while part-time jobs increased by 2.1 million is indicative of how economic crisis has provided an enormous opportunity for the ruling elite to degrade working conditions, and increase profitability by driving down wages and working conditions.

The obscene wealth of the 1%, or more accurately, of a tiny proportion of the 1%, is historic in its scope and is tied in completely with financial speculation. This elite is nothing short of a parasite, greedily feasting on humanity. The wealth they hold is so enormous, it’s incomprehensible – globally, since 2009, the richest 400 people have almost tripled their wealth, from $2.4 trillion to $7.05 trillion (Forbes).

Marie Antoinettes­ for the 21st Century

In recent years it has became trendy in the most exclusive restaurants in Stockholm, for customers, in an ostentatious display of their wealth to order a bottle of champagne worth thousands of euro and to order the waiter to “Vaska” or pour it down the sink. In a world rife with poverty and deprivation, this crude and elitist display is obscene and obtuse in the extreme. Magnify this act a million times and we might approximate the obscenity of the top financial speculators.

Quite simply, we need to disempower them and expropriate their wealth and power. Occupy’s “We are the 99%” idea has found concrete expression in the US in the growth of the $15 Now movement for a higher minimum wage that has scored victories in a number of states, in Ireland in the water charges movement, and in Southern Europe in the anti-austerity social movements. The failure of Syriza in Greece to end austerity shows the need for a global movement of the 99% to engage in conscious political organising around anti-capitalist and socialist politics that pose democratic public ownership of wealth, resources and the key levers of the economy including the whole financial sector, as an alternative to the despotic rule of the 1%.