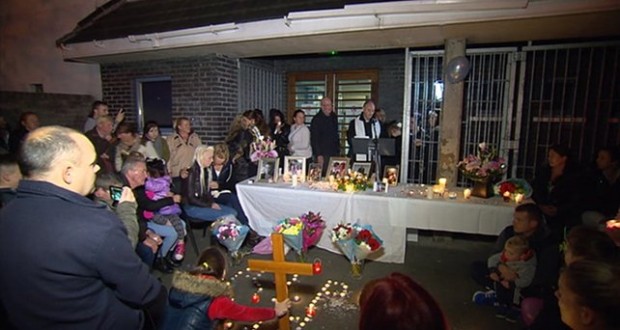 Carrickmines’ tragedy and the fight against anti-Traveller racism

Many have been deeply moved by the terrible catastrophe in Carrickmines that led to the tragic deaths of ten members of the Travelling community.

Early in the morning of Saturday October 10th, a fire broke out in a Traveller halting site.  The victims and survivors were living in steel sheds for years on end, and the steel melted in heat so extreme that firefighters who went in had to be hosed down afterwards. Five adults and five children, members of two families who died in this tragedy lived in terrible conditions and endured a horrific death. As well as expressing our profound sympathy with the victims, the survivors and their loved ones, we need to express anger at the systematic racism by the Irish state towards the Travelling community that led to this disaster.

Since the fire there’s been an outpouring of sympathy and support, with vigils with hundreds in attendance being organised. However, there has also been an unmasking of bigotry towards the Travelling community that has been fostered by the capitalist establishment in Ireland over many decades.

An example of this racism was shown the day after the tragedy when two Travellers, who were survivors of the fire, were refused entry into Ollie’s Bar in Carrickmines on the basis that they were “not regulars.”  Despite the harrowing ordeal they were subject to, they faced the same humiliating discrimination that many, if not most, Travellers face on a daily basis.

Later, a handful of locals physically blocked a site that was chosen to accommodate the survivors. There was a clear contrast in the manner in which these residents were indulged compared to the treatment faced by anti-water charges protesters when blocking the installing of water meters, where they have often been subject to harassment and arrests at the hands of the Gardai. Instead of being arrested, a meeting was arranged between the residents and council officials.

Rather than condemning this disgusting blockade, Labour councillor Lettie McCarthy called for “common sense and calm” to be shown “on both sides”! Enda Kenny refused to oppose these actions when he said: “there’s deep sensitivity there… consultation and conversation with local communities is very important.” Kenny and McCarthy basically vindicated the residents and their shameful actions.

A catastrophe such as the fire in Carrickmines is never fully an accident. If ten people hadn’t been crammed into a steel portakabin for years at a time, this would not have happened. They were living in such horrible conditions directly because of what Lorraine McMahon of a Ballyfermot travellers’ organisation warned was a “systematic disinvestment” in services and supports for travellers since the austerity policies started. There was a 40% cut to local traveller organisations from 2008 to 2013. Education supports were cut 85%. Traveller inter-agency groups were cut entirely. The accommodation budget was €70 million in 2007 and by 2013 it was €3 million.

Meanwhile the Council was paying somebody up to €500 a month for these metal death-traps. It’s just like the slum-lords who presided over tenement collapse disasters at the beginning of the last century in Dublin.

Many Fine Gael and Fianna Fáil councillors have campaigned for election with promises of keeping Traveller accommodation out of their areas.  An example of this was seen with Josepha Madigan, Councillor for the Stillorgan ward on Dun Laoghaire-Rathdown County Council, a neighbouring ward to the one where Carrickmines is located. She produced a leaflet in last year’s local election campaign saying that the building of a Traveller halting site was “a waste of valuable resources”.

Decent homes for all

Of course, the desperate treatment of Travellers was just the same in boom times, and the supports and rights that existed had to be fought for tooth and nail by the community. Travellers face not just individual prejudice, but systemic racism, seen in the continued refusal to grant recognition as an ethnic group. And whenever the capitalist system stumbles into an economic crisis like in 2007/8, the first to be hit, and the worst-hit, are poor minority groups like Travellers.

The scandal of homelessness, families living in emergency accommodation, Travellers being forced to live in substandard accommodation, or refugees and migrants being forced to live in Direct Provision must be brought to an end. The resources exist in our society to provide decent homes for all, be they members of the settled or Travelling community, indigenous Irish or migrants seeking sanctuary here. Instead of giving massive tax breaks to the super rich and big business and paying €7 billion to bondholders each year, billions could be invested to build social and affordable houses as well proper accommodation in well-resourced Traveller halting sites.

When an establishment politician is put on the spot about travellers’ rights, they hide behind procedure and pass the buck. While they always protest that they themselves are not prejudiced, in reality their anti-traveller statements and cutbacks have fuel anti-Traveller sentiments and increased the hardship against this marginalised community.

We live under a capitalist system that has inequality written into its DNA, where the massive wealth that exists is at the disposal of the rich as shown by the fact that the richest 300 have increased their wealth by €34 billion while the rest of us have endured €31 billion in austerity. Travellers are the primary victims of a system where the priorities of an economy lie in maximising profits for a few instead of prioritising the needs of the majority, including the right to a decent home and proper health and education.

There is a real need for a political alternative that fights for a democratic socialist society based on human solidarity, not racist division like we have seen against Travellers over many years, and where each individual can develop to their full potential.