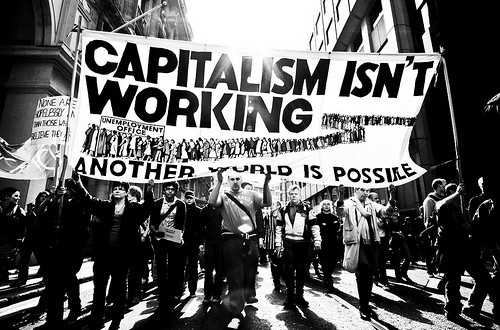 Why this rotten system can’t be reformed

On 12 July in Paraguay the Pope told young people to “make a mess” in their struggle against capitalism. On the same day as the leader of one of the most conservative institutions on earth made this call, Syriza jettisoned its anti-austerity stance in a historic betrayal of the Greek working class.

Alexis Tsipras dragged himself and Syriza completely over to the side of capitalism in a matter of months, something it took Kinnock and Blair years to achieve with Labour in Britain.

This new disastrous bailout or robbery of Greece was not inevitable. The responsibility lies with the leadership of Syriza who, when their appeals were rejected by the Troika, had no alternative strategy or policy.

They thought that significant debt relief and an end to austerity could be achieved in negotiations with the EU – that is, they had illusions that capitalism would reform itself into something socially progressive.

Austerity and capitalism are about maximising the transfer of wealth from the masses to the super-rich, and the economically stagnant EU was always going to represent big business interests in this battle with the Greek people.

Instead, if Syriza had ensured that ownership of the main sectors of the economy, including the banks and the financial system, were put under democratic public ownership, not only could the EU sabotage of the economy have been resisted, but a proper plan to use resources to maximum benefit of the people could have been initiated outside of the Eurozone.

The referendum result on 5 July shows that such a stand against the EU and capitalist austerity could have received huge active support in Greece and transformed the political situation in Europe.

Syriza would have huge authority to appeal directly to the working class of other countries for a united stand against the EU and the respective EU governments, all of whom are imposing capitalist austerity.

By refusing to challenge the system, Syriza’s original good intentions are now meaningless as they impose vicious austerity including the biggest programme of privatisations in Greek history and cut the minimum pension from €490 to €360 a month. Now every single new law must be agreed first by the Troika. The crisis and the national debt will get worse and Grexit will beckon in any case.

In most EU countries, similar stark choices will be posed. Stick with the capitalist EU straightjacket and the crisis will worsen and society will fragment. There is no road to reform either within the EU or capitalism.

The alternative is to end the rule of the billionaires and take the key wealth and resources into democratic public ownership and plan for people’s needs.

The problem in Greece wasn’t that people wouldn’t fight; the failure was with the leadership and their policy. The class divide may not be exactly 1% versus 99%, but clearly the vast majority are suffering under this system and the massive response that Jeremy Corbyn and Bernie Sanders are getting in Britain and the US shows the potential to unite a big majority.

Corbyn and Sanders pointing to the complete inequality of capitalism and articulating what people need has created huge enthusiasm, partly because they are political figures who aren’t seen as part of the system.

The tumult that these campaigns have caused must be translated into the start of new mass movements to challenge the system.

The demands of Corbyn and Sanders on wages, jobs and education articulate the aspirations of the masses. But they are the opposite of what capitalism is prepared to give. Like in Greece, this raises the question, when your demands are refused, what next?

Sanders’ call for a political revolution gets a huge response, but in itself that isn’t enough. If the capitalists are left in control of the economy they will continue to dictate the political and social terms. We also need an economic and social revolution.

Billionaire class must be challenged

Corbyn’s campaign has provoked an important discussion about public ownership of wealth. However, taking transport and energy only into democratic public ownership leaves decisive wealth producing sectors in the hands of the billionaires – we would not have the economic means to transform people’s lives or society.

Every significant but reasonable reform that people need goes beyond what capitalism is prepared to give. If capitalism can’t afford the demand for a decent life for all, it’s time for real socialist change where the working class and the poor own, control and democratically plan the economy for the good of all.