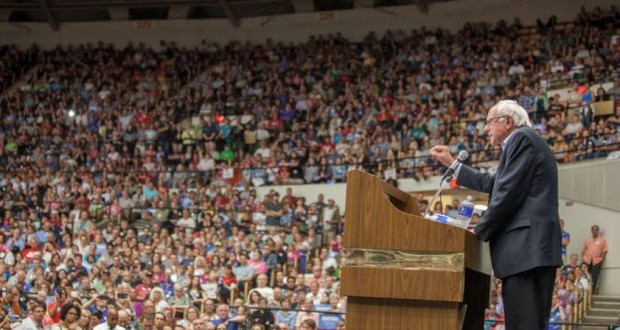 The campaign of Bernie Sanders in the US presidential election is getting a lot of attention internationally because of the momentum it is gaining. Sanders, the only self-proclaimed socialist in the US Senate, is putting forward a series of radical arguments which is attracting a lot of support amongst young people and large layers of working-class people.

His call for a “political Revolution against the billionaire class” has resonated far and wide, so much so that on the 1st day of his campaign, 100,000 people signed up to get involved and 35,000 people donated a total of $1.5 million (which is more than the other candidates raised) of which 99% were small amounts of $250 or less.

His programme includes taxing the rich and big business, investment in a trillion dollar programme to create jobs, a minimum wage of $15 an hour, universal healthcare system, stopping TPP (Trans-Pacific Partnership) and other corporate deals, an increase in the rights of unions and an end to the gender pay gap.

These arguments have been met with huge support which is reflected in the huge rallies and the involvement of thousands of activists. This is happening against the backdrop of the devastating crisis of capitalism which has left the working class to pick up the pieces. With record levels of inequality and poverty, the top 1% is making huge profits and public services are being dismantled in order to lessen the tax burden of big business.

The US has a highly repressive criminal justice system, the U.S. accounts for 25% of the world’s prison population and the Black Lives Matter movement has emerged against the brutal police killings of Black people.

There is a huge amount of frustration at the two-party system of the Democrats and Republicans. Both parties receive vast amounts of money from big business and keep passing pro-business, anti-worker legislation. A recent poll shows that 47% of Americans would vote for a socialist, including 70% of people under 30 years of age. This is very significant indeed – it reflects a general radicalisation and the real need for an alternative.

The American working-class would also have been radicalised and inspired by different movements in recent years such as the Occupy movement and #BlackLivesMatter. An indication of this growing radicalisation was shown by the election of socialist Kshama Sawant to Seattle city council and the successful struggle for a minimum wage of $15 per hour that Kshama led.

There are however noteworthy deficiencies in the political approach of Sanders and his campaign. While he opposed the Patriot Act of 2001 and the invasion of Iraq, he didn’t oppose the war in Afghanistan in 2001. He didn’t oppose the Israeli massacre in Gaza and has not opposed the actions of the Israeli state generally. Sanders needs to clearly show his support to the Black Lives Matter movement which has gained momentum amongst the young African-American community and helped raise the issues of racism, police brutality and mass incarceration.

Break with the Democrats

Socialist Alternative, the sister organisation of the Socialist Party, has argued that there is a fundamental contradiction in the Sanders campaign by his running in the Democratic primaries. He cannot oppose the rule of the billionaires by using of one their tools, namely the pro-big business Democratic Party itself.

If his campaign is really to represent the interests of working class people Sanders must break with the Democratic Party and stand on an independent left basis. In the event of Sanders losing in the primaries and he then goes on to support the Democrat candidate Hillary Clinton, the huge amount of activists and supporters mobilised during his campaign by a thirst for change could be demoralised. However, running as an independent to oppose the establishment would help build a new mass movement of the working-class as a new broad left alternative.