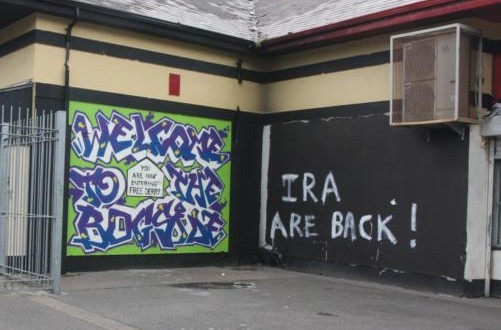 New grafitti which has appeared in the Bogside over the weekend. 3107JM61

Yet again the Northern Ireland Executive is facing a real risk of a collapse. A crisis erupted in the aftermath of the killing of Kevin McGuigan in the Short Strand area of Belfast on August 13th.

His murder was immediately assumed to have been carried out by the Provisional IRA (PIRA) in revenge for the killing of Jock Davidson on May 5th. The two murders might have quickly slipped out of the headlines except for the Chief Constable of the PSNI’s announcement on August 22nd that “the Provisional IRA still exists.”

Prior to his statement there was a widespread belief that the PIRA did indeed still exist in some form. Every so often stories would appear in the press regarding mainstream republican involvement in fuel smuggling and other “fundraising” activities. Such allegations were met with a collective shrug of the shoulders.

The PSNI statement changed everything. What was hidden came into the open. Suddenly the state were admitting that not only do the PIRA still exist but that it is armed and is prepared to use its arms. The UUP moved quickly to withdraw from the Executive. Peter Robinson has loudly condemned the UUP’s move but it undoubtedly puts him under pressure.

The Executive was already in crisis before the recent events. Over the summer there were clear indications of behind the scenes talks however and an agreement to break the impasse on so-called “welfare reform” was likely in September. All the indications are that the DUP would prefer not to bring down the Executive but they are wary less the UUP steal their mantle as the most steadfast representatives of the Protestant community.

They appear to be seeking the establishment of a new body to make assessments about alleged PIRA activity, similar to the “Independent Monitoring Commission” which oversaw the status of all the paramilitary ceasefires between 2004 and 2011. If they don’t achieve this aim, and the Executive falls, what happens next is uncertain. The Secretary of State, Teresa Villiers, has the power to call an immediate election but will hesitate to do so.

She no longer has the power to suspend the Assembly, and return to direct rule, as she once did, but emergency legislation could be passed at Westminster to allow this to happen. This is perhaps the most likely scenario – a long period of direct rule whilst prolonged negotiations between the DUP and Sinn Fein continue.

Whatever happens next the latest crisis only serves to underline the plain fact that the peace process has not delivered on any of its promises. None of the problems facing working class people in the North have been solved, including the dominance of paramilitary groups in working class areas. All of the paramilitary groupings remain armed and active to one extent or another.

Even if yet another “agreement” is cobbled together it will not deal in any fundamental way with the issue of paramilitary control over working class areas. Only one force is capable of pushing the paramilitaries to one side and ultimately breaking their grip. That force is a united and organised working class. Working class people are united in their unions and on many occasions have followed a union lead to strike and demonstrate against sectarianism and the paramilitaries. The trade unions could and should organise against paramilitary racketeering and intimidation.

The working class is also the only force which is capable of challenging the sectarian political parties. The establishment of a new political party, which seeks to unite Catholics and Protestants in a common struggle for a better life, would undermine support for the sectarian parties.

If trade unions and campaigning groups came together, a new voice could quickly find firm foundations and grow. Initial caution could quickly be replaced by enthusiasm and a wave of hope. The period we are in now is fraught with difficulty and danger but resolute action by the trade unions still has the capacity to transform the situation.