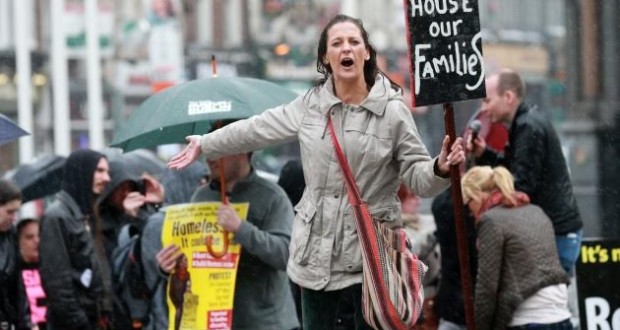 Homelessness is now an epidemic. Rents are rocketing in cities. Dysfunctional banks won’t give mortgages to ordinary workers. More than 100,000 families wait for non-existent social housing. It’s arguably the state’s worst housing crisis while the government boasts of ‘recovery Ireland.’

This crisis was completely predictable. Successive governments collapsed social and affordable home-building. Even during the boom, there was always a shortfall. But since the economic crisis, capital spending on social housing in Ireland was cut by 72%, from €1.38bn to €390m, between 2008 and 2012. So, social housing had to stop while the bondholders were being paid back.

There is also an ongoing ideological opposition to social housing by the political establishment. The presence of Labour in government has done nothing to abate this. More than 75% of the government’s Housing 2020 Strategy relies on private sector landlords or developers to provide housing on a rent or lease basis.

But that strategy is utterly failing. Daft.ie reported only 4,600 properties available to rent in the entire state in August, down from 6,800 in 2014. The banks are moving to repossess and sell properties (up about 500%) adding significantly to the homeless crisis.

These figures don’t tell the story of the human misery of the housing crisis. In our work as elected representatives, the Socialist Party and Anti Austerity Alliance have dealt with people – mainly women with children – in appalling stress. Children reverting to bed wetting and even soiling; poor physical and mental health; missing school due to dislocation. One young woman in a ‘hotel’ videoed cockroaches in the shower and her children refuse to stay there. Sleeping in cars is becoming normalised as councils can’t find any emergency accommodation. Dublin City Council has a gap of €18 million in this budget.

How absolutely wasteful a policy. One Dublin woman was refused an increase in rent supplement and became homeless. But three nights in a Castleknock hotel was the equivalent of her full month’s rent allowance.

The cause of the housing crisis is capitalism itself which puts profit before the needs of people. Only by taking the construction industry and banking into public ownership and control can this nightmare be resolved. It was public investment in large-scale council house building which dealt with the two previous acute housing crises in the 1930s and 1970s.

Such investment is effectively banned by the Troika terms regarding adding to state borrowing debt. But a left government would have to refuse to abide by those terms. The private sector has clearly no interest in providing affordable housing and – because of the scale of the crash – is dysfunctional and has no ability to build the tens of thousands of homes required.

The trade union leaders should initiate a national demonstration to demand action on the housing crisis.