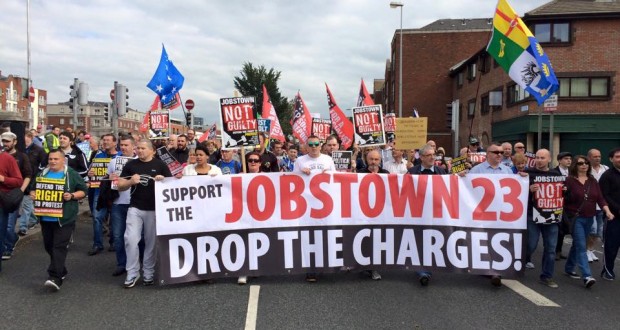 Jobstown is not guilty: Fight this criminal injustice

Text of the Socialist Party leaflet given out a #JobstownNotGuilty protest today.

The criminalisation of those who protested against Joan Burton in Jobstown last November is a disgrace. This largely spontaneous protest by residents of a working class community was directed against a government Minister who has overseen cuts to rent allowance, child benefit and more recently lone parent allowance.

The protest was not an isolated one. It was a reflection of the growing anti-water charges movement that exploded from below late last year. After six years and €31 billion of worth of austerity later, working class people in this country said “enough is enough”.

The summonses that were issued this week are an attack on the people of Jobstown, the wider anti-water charges movement, the AAA and the right to protest. It is political policing pure and simple and a mass movement must be built to ensure that the capitalist establishment is defeated.

The injustice of austerity

The injustice of the political policing we are seeing in Jobstown is compounding the broader injustice we have witnessed in our society in the last 7 years. While austerity has devastated the lives of working class people, the richest 300 have obscenely increased their wealth by €34 billion.

We are paying €8.5 billion per annum on the interest of an odious debt that was created by bankers and developers, yet we are told that there is no money for investment in social housing to end the homelessness epidemic. The transfer of wealth from the 99% to the 1% is continuing and inequality is increasing despite a supposed recovery in the economy.

Capitalism is a system built on such inequality. It is a system based upon maximising and increasing profits, wealth and power for a tiny elite – the bankers, the developers, big business, bondholders and the super-rich.

All of the main parties accept the logic of this profit driven system. This is why have they have been so slavishly willing to implement cuts to social services, social welfare and introduce regressive taxes such as the property and water charges, while the banks are bailed out to the tune of €64 billion.

For a Left Government

We need a new movement of the working class that fights for a Left Government in this country. Such a government would tear up the rules of the Troika and the capitalist market generally. It would not pay the debt that has been foisted on us and would massively increase social expenditure on housing and public services.

A Left Government would fight against all forms of inequality. It will end discrimination of LGBTQ people and would repeal the 8th amendment and legislate for full abortion rights for women.

Allied with a mass movement of the working class, it would take the key resources of the economy into democratic public ownership and plan the economy according the needs of people. The private ownership of the wealth and resources of our society has proven to be a disaster and we need radical socialist policies that will end the rule of the 1%.

The Socialist Party is part of the Anti-Austerity Alliance, a new working class political movement that has been at the forefront in building organised mass non-payment of the water charges. The Socialist Party is an anti-capitalist, socialist organisation, part of an international socialist movement, the CWI. We are committed to fighting for the democratic socialist ideas of the founders of the working class movement in this country, James Connolly and Jim Larkin. Join us today. 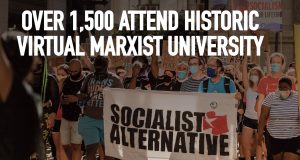