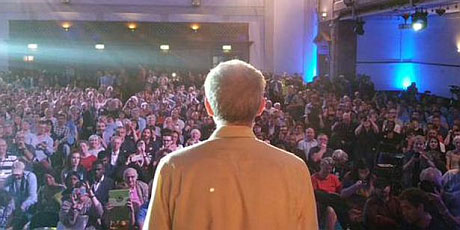 The rise of Jeremy Corbyn in the Labour leadership contest marks a very welcome political upheaval in British society. It is a clear rebuff to the idea that society has moved to the right and that the austerity agenda has mass support.

Over 50,000 have attended his rallies and hundreds of thousands have signed up to vote for him. He is likely to win and is the most popular candidate both inside and outside the Labour Party. He even leads among UKIP voters, showing the potential for a strong anti-cuts voice to cut across their growth.

The enthusiasm behind Corbyn’s campaign demonstrates that people can be engaged in politics when they see a meaningful alternative being posed. The Socialist Party believes this is an important opportunity that must be used as a springboard towards a mass movement capable of defeating austerity and building a new political voice for the working class.

Corbyn articulates a left-wing alternative to the neo-liberal programme of the Blairite leaders of the Labour Party. Unable to win support away from Corbyn through political argument, they have resorted to other methods – witch-hunts, scaremongering and attempted character assassination. An aspect of this campaign has been to attack Corbyn in regard to his record on Northern Ireland and particularly his willingness to talk to members of the republican movement in the 1980s and 90s.

It is hypocritical of the Tories and Blairites to attack Corbyn on such grounds. In the early 1990s, John Major famously said that to speak to the republican movement would “turn my stomach and most people in this House and we will not do it” but the truth was, of course, that the British state was engaged in secret talks with the IRA. Today, these same people would defend their actions as a prerequisite for the “peace process”, in the same way Corbyn defends his actions.

At the same time, it is a mistaken approach on Corbyn’s part to be equivocal in regard to the campaign of the IRA. He is right to point out the reactionary role played by the British state during the course of the Troubles, including the massacres at Bloody Sunday and Ballymurphy, collusion and the brutal treatment of political prisoners. However, it is important to be clear that the methods of the IRA – far from being capable of defeating British imperialism – were futile and served only to heighten sectarian division.

Corbyn was not alone in the Labour Party in developing a working relationship with Sinn Féin and the republican movement many others on the left of the party also adopted a similar position. This was, in part, a response to the disastrous policy of bipartisanship with the Tories on the question of Northern Ireland, which saw Labour governments send in British troops in 1969 and escalate repression in the 1970s.

Supporters of Militant – the predecessor of the Socialist Party, which was the Marxist voice within the Labour Party – said at that time that many like Corbyn and Ken Livingstone had “abandoned the policy of the right in favour of a no less disastrous policy of their own.” The necessary response of the labour movement at this time was not act to coat-tail the republican movement or any sectarian force but to argue clearly for an independent, working class position which could act to unite Protestant and Catholics against the barbarism of paramilitarism, repression and sectarianism around a socialist programme.

This is not an as abstract question. The legacy of the Troubles remains a dominant issue in Northern Ireland today. Victims, survivors and all of those who lived through the violence deserve a truthful accounting with the past. The sectarian parties, however, seek to examine the past through the prism of today, seek to confirm their analysis and reinforce their positions. None of the key actors in the Troubles have any interest in exposing their own records to scrutiny, be they the republican movement, loyalist organisations or the British state.

Corbyn’s approach also indicates that he feels Sinn Féin, in particular, can play some sort of positive role today. This is a dangerous approach. Sinn Féin – like the SDLP and the unionist parties – is a sectarian organisation which relies upon the division of working class people. It is also not fundamentally different to the other parties in regard to key issue of austerity. Along with all the main parties, they have agreed to billions of pounds worth of austerity, including the planned destruction of 20,000 public sector jobs.

Workers have shown that they are prepared to take industrial action to fight these cuts and will point their fire not just at the Westminster government but at those who do their bidding from Stormont, as was the case with the public sector strike on 13th March 2015. Corbyn has called for councillors across Britain to stand together and resist the cuts. This demand should be extended to the devolved administrations in Scotland, Wales and Northern Ireland.

In our view, the local parties left to their own devices will not do so. It’s not simply a question of the local parties here being powerless. They are all signed up to the neo-liberal project of “rebalancing” the economy by slashing public services and giving handouts to big business, including the planned cut to corporation tax. Only a mass movement from below – the embryo of which we saw in the strike action earlier this year – could assert the pressure required to force them to refuse to implement the cuts.

It won’t simply be regarding austerity that Corbyn and the left will need to clash with the sectarian Assembly parties. He has pledged to extend same-sex marriage and the 1967 Abortion Act to Northern Ireland and reverse the “gay blood” ban if he becomes Prime Minister. This would find significant support among ordinary people and particularly young people in Northern Ireland who are sick of the Dark Age politics here. However, he will find significant opposition among the political parties, particularly regarding a woman’s right to choose.

All the main parties support denying women the right to control their own bodies. In October 2008, several Labour MPs did attempt to have the 1967 Abortion Act extended to Northern Ireland. They were met with joint opposition from all the local party leaders including Gerry Adams who signed a letter stating that they were opposed to “any attempt to make abortion more widely available in Northern Ireland.” Corbyn – as Leader of the Opposition – could be an important ally in the struggle LGBT and women’s rights. However, it will require more than that to win these rights. It will require a mass movement in Northern Ireland that is prepared to challenge the conservative sectarian establishment.

Corbyn’s campaign is being followed closely and supported enthusiastically by an important layer of workers and young people in Northern Ireland, which points to the possibility of building a left, anti-austerity force here. It is part of an international phenomenon which see forces on the left emerge, often seemly from nowhere, to articulate the massive anger at austerity and establishment politics that exists. This has been seen in the enormous movements in Greece, the emergence of Podemos in Spain and, in a different way, with the significant support Bernie Sanders has received in the US Democratic Presidential primary campaign. This mood will also find an expression here with people looking to build alternative to the bankruptcy of right-wing, sectarian parties.

Unfortunately, it is unlikely to emerge from the British Labour Party, the local branch of which supports one of the right-wing candidates, Andy Burnham. Their spokespeople also acted as public defenders of the worst aspect of Blairism. Similarly, the Irish Labour Party faces annihilation in the coming period due to its part in implementing vicious austerity in the South and are extremely hostile to Corbyn.

Both parties have also historically failed in Northern Ireland. In the 1960s, the Northern Ireland Labour Party was able to build a significant force that was an alternative for workers and young people across the sectarian divide. Today we need build a new political party based on uniting working class people against austerity, sectarianism and the backward nature of the Stormont politicians.