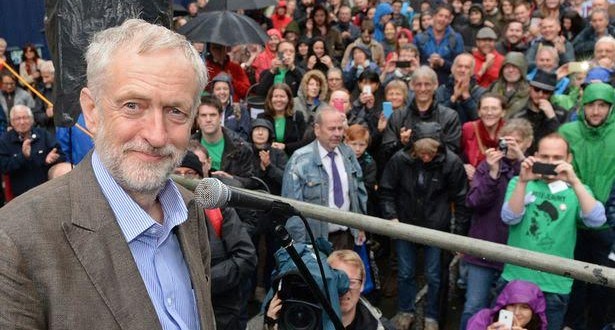 The election for the next leader of the Labour Party has become the focus of a major movement against austerity and for a Left alternative in Britain.

Jeremy Corbyn, standing on a clear left, anti-austerity and anti-war platform has galvanised huge support and enthusiasm, drawing huge crowds and is now poised to win the election on September 12. After 5 years of Tory austerity it illustrates the growing shift to the left in British society.

The latest poll on August 10 showed him with 53% of the first preference, an incredible 32 percentage points ahead of Andy Burnham in second place on 21%. The support for Corbyn represents a movement and has transformed the political debate in Britain.

The victory of the Conservative Party in the General Election in May of this year was a blow to the workers movement and the Left. The Tories have declared open season on public services, welfare and trade union rights. The Tories are planning £12 billion in welfare cuts, and have already introduced swingeing cuts to tax credits for low paid workers. They are planning laws to drastically attack the rights of workers to take strike action.

The lack of confidence in Labour resulted in it losing support to the SNP, UKIP and the Green Party and in huge numbers not turning out to vote at all. Since the election there has been a major backlash against the Tory austerity agenda, with 250,000 joining the People’s Assembly March Against Austerity in London. Corbyn’s election campaign has given voice to this growing radicalisation.

Almost all of his public meetings are packed out, with often hundreds being addressed outside the venue. The Labour Party has essentially tripled in size since the election, with 100,000 joining as full members, 190,000 affiliating through unions and 120,000 paying £3 to become ‘registered supporters’. Huge numbers of these will have joined specifically to vote for Corbyn. Reflecting this pressure from below, UNITE and UNISON have also given their backing to him. Refuting the standard right-wing argument that Labour under Corbyn would be “unelectable”, a number of polls show him as the most popular candidate with the general public.

The surge around Corbyn has brought left and socialist ideas back into the public discussion and consciousness. It has raised public ownership of utilities and railways, the defence of the welfare state and public services and opposition to austerity. Corbyn has come under vicious attack from the media essentially relating to his opposition to imperialist wars and Britain’s foreign policy. He has also stood against the scapegoating of immigrants for the problems created by austerity. Hysterical attacks from figures such as Tony Blair, Neil Kinnock and Gordon Brown have only added to his support.

The transformation of Labour

However, a Corbyn victory would only be the beginning of the battle with the Labour Party establishment and apparatus. The reality is that since the 1990s with the collapse of Stalinist states in Russia and Eastern Europe and the ascendancy of neo-liberal ideology, the right-wing have been in more or less in full control of the Labour Party with the left of the party marginalised or driven out and the activist base of the party fundamentally undermined.

Labour was transformed into a party of big business and the market, despite still having the allegiance of huge numbers of working class people. Jeremy Corbyn will face, ­from the beginning, hostility from the vast majority of Labour MPs and of the party apparatus. The surge around Corbyn was only possible because of the new ‘open primary’ system being used to elect the leader, which allows members of the public to affiliate and vote, and eliminates the role of MPs in choosing the leader. Ironically, this was itself introduced under Ed Miliband as a means of sidelining the role of the unions in the contest, and even further diluting the influence of left politics in the party. Instead it was seized on by a big layer of working class and young people as a vehicle for a political alternative.

The plans within the Parliamentary Labour Party (PLP) and the apparatus to undermine Corbyn as leader are already underway. The Labour Party HQ staff is busily engaged in trawling through the social media profiles of new members in order to purge those deemed not to support the ‘aims and values of the Labour Party’ i.e. those who have left or socialist ideas! Meanwhile, according to an article in the Telegraph of Aug 16, Labour MPs are debating whether to engage in open rebellion against Corbyn from the outset or to undermine him over a period of time.

Simon Danczuk MP declared: “Am I going to put up with some crazy left-wing policies that he is putting forward and traipse through the voting lobby to support him? It’s not going to happen, is it? So I would give him about 12 months if he does become leader” In response to this sabotage, Corbyn’s campaign has declared ‘unity is our watchword’.

Unfortunately, the Labour establishment will not take the same attitude. Unity with the right cannot be the basis for the undermining of Corbyn’s mandate for left and anti-austerity policies. The Socialist Party in England and Wales has argued that the movement which has developed around Corbyn will need to organise to defeat the PLP and the right-wing. This should include deselection of right-wing MPs, and the transfer of power from the PLP to genuine forums of democratic decision making.

The reality is that the process of such a struggle would lead inexorably to a split in the party with either the right or the left being forced to leave. This puts on the agenda a new, mass party of working class people in Britain. Such a new force would be a hugely positive and significant development and be the basis for the redevelopment of socialist politics on a mass scale.