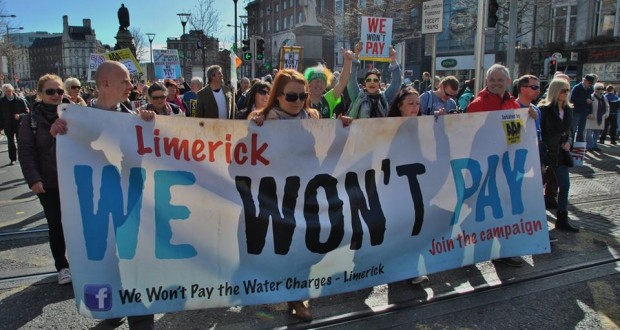 This Fine Gael / Labour government have thrown everything they have into their flagship scheme to impose water charges against the wishes of the vast majority of working class people. Mass non-payment has already caused a crisis and has the potential to bring the whole house of cards tumbling down.

Threats and intimidation, either directly or via tactical ‘leaks’ to the mainstream media have become the norm. Dedicated call centres have cold-called non payers, threatening court action and fines. They falsely claimed they could simply rob it from our income. They even used landlords to bully tenants to register and pay.

57% non-payment of the first bill in July represents a defiant act of mass civil disobedience in the face of those tactics. The boycott, along with the massive mobilisations of people in protest, has again and again rattled this government and obliterated any idea that working class people are willing to accept austerity. The enormous groundswell of anger after 7 years of brutal austerity and the devastation of working class communities has exploded outwards and won’t easily be pushed back.

A not so “good start”

Despite comments from Alan Kelly that a 43% payment level represents “a good start”, the reality is that Irish Water is becoming an albatross around the neck of the government. The failure to pass the Eurostat test is a humiliating defeat for them and means that their central plan to keep Irish Water “off balance-sheet” is in ruins. Yet, still they march on, determined to force this hated tax down our throats.

If non-payment of the second bill is bigger than the 57% who have already joined the boycott, then regardless of the spin from ministers, it will be a further blow to attempts to impose water charges. We can cripple Irish Water financially and cause a terminal crisis for this government.

The Socialist Party, alongside the Anti Austerity Alliance has been at the forefront of

advocating and building the boycott campaign from the outset. Hundreds of campaign groups around the country have sprung up and shown the potential for mass movements of working class people. Those activists, convincing people in their communities to join the boycott can have an enormous effect.

Right2Water and all parties who oppose the water charge, including Sinn Fein, must now clearly come out and call for a boycott of the second and future water bills. Growing non-payment is critical to defeating this austerity charge.

A victory on water charges can clear the way for a new movement against all austerity policies and the injustice and inequality that capitalism demands.