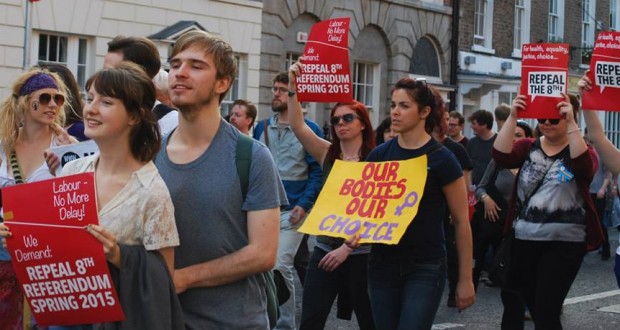 Text of the Socialist Party that will be given out on the March for choice on Saturday, September 26, 2pm at the Garden Remembrance, Dublin City City.

The historic victory in May for Marriage Equality is a huge boost, not only for the LGBTQ community, but also for all who wish to see change and progress. A mobilised and politically engaged section of LGBTQ people, women, the working class and young people were a crucial to the resounding Yes vote. We need to build on this momentum and continue the fight for full equality. Central to this, is the struggle to repeal the 8th, Ireland’s dangerous, discriminatory and Medieval abortion ban.

As a General Election approaches, we need to exert huge pressure on the whole political establishment to demand our right to a referendum to repeal the 8th. FG and FF spokespeople have repeatedly insinuated that they would like a ‘replacement’ in the constitution for the 8th. This is absolutely unacceptable. There can be nothing in the constitution governing women’s bodies if women are to have equal access in law to healthcare.

The Socialist Party is 100% behind the abortion rights struggle and Socialist Party activists, TDs Joe Higgins and Paul Murphy both participated in the Abortion Pill Train action last year, organised by ROSA and Ruth Coppinger TD. By breaking unjust laws and bringing illegal abortion pills into the state, we have spread the word that women can use WomenOnWeb.org to access abortion pills by the post, to get safe illegal abortions in Ireland.

Challenge all inequality and injustice

Women’s full equality has to include their right to bodily autonomy and sexual liberation. For us, this struggle is inextricably linked, not only to the struggle for LGBTQ equality, but also to what’s at the root of the revolt against the water charges and austerity, namely a challenge to the enormous wealth inequality at the heart of Irish capitalism. The richest 300 people in Ireland have 84 billion euro (Sunday Independent Rich List). This is repeated on a global level. By next year the richest 1% will own more wealth than the other 99% of the global population.

Capitalism as a system creates and presides over massive inequality. On top of this, the capitalist drive for profit breeds war and environmental destruction as the tens of millions of refugees worldwide suffering unbearable human misery can attest to. Furthermore, capitalism has a vested interest in maintaining the oppression of women – the worldwide beauty, fashion and sex industries make billions in profits from promoting the objectification of women’s bodies, feeding into the global epidemic of violence against women. Women are disproportionately low paid workers and still tend to bear the largest burden of unpaid housework, childcare and care of the elderly.

We need an anti capitalist struggle that puts forward the socialist alternative – democratic public ownership of key wealth and resources in society, and the solidarity of the working class and all the oppressed in Ireland, across Europe and globally in a movement for such change. In Ireland, the struggle for a Left government is also necessary as only the Left would be willing to separate church and state and completely, by kicking the Catholic Church out of schools and hospitals, a pre-requisite for women’s and LGBTQ equality.