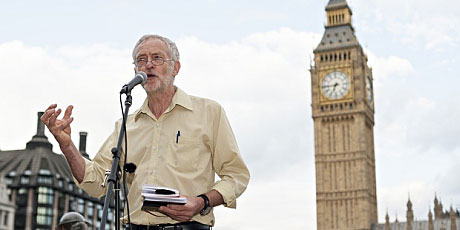 “Jeremy Corbyn ‘on course to come top’ in the Labour leadership election” declared the New Statesman on 15 July, 2015.

Following leaked polling which suggested that Corbyn was ahead of all three of his Blairite rivals, the Daily Telegraph published an article on how its readers could ‘doom’ Labour by paying the nominal £3 fee to become a Labour supporter and voting for Corbyn.

No doubt if, as is possible, Jeremy Corbyn wins the leadership contest, the pro-capitalist majority of the parliamentary Labour Party will try to blame it on readers of the Daily Torygraph.

This would be far from the truth. The popularity of Corbyn’s candidature reflects, above all, enthusiasm for his anti-austerity stance.

Labour lost the general election not for being too left wing, as all the other Labour leadership candidates claim, but for not being left wing enough.

Millions of ‘traditional Labour’ voters did not vote, or voted for other parties, because they could not stomach Labour’s ‘austerity-lite’ programme.

Now, faced with further vicious attacks on working class people by this Tory government, Jeremy Corbyn’s candidature has kindled a hope that Labour could become a voice in defence of all those under the cosh.

His campaign programme is actually quite limited, merely calling for ‘meaningful regulation of the banking sector’ rather than for nationalisation of the banks under democratic control, for example.

Nonetheless he has enthused many with his clear call for abolition of student fees and to reinstate the student grant, his promise to repeal anti-trade union laws and other pledges.

The result is a layer of people signing up to participate in the leadership election in order to vote for Jeremy Corbyn.

One local Labour Party chair told the New Statesman that, “‘more than two thirds’ of recruits since the election are supporters of Corbyn.” Three national Labour-affiliated trade unions have given support to Corbyn, including Britain’s biggest union Unite, compared to just one (UCATT) that has supported Andy Burnham, supposedly the ‘trade union candidate’.

In addition two left non-affiliated unions – the RMT and the FBU – have backed Jeremy Corbyn. So far 65,000 members of affiliated unions are reported to have signed up to vote in the leadership contest.

No doubt, the right-wing MPs who nominated Corbyn, allowing him to scrape onto the ballot paper, are now nervously regretting their actions.

One of their major motivations was to make it easier for the leaders of the affiliated trade unions to justify remaining with Labour.

This could have proved impossible if the ‘pro-trade union option’ had been Andy Burnham – the man who was booed at GMB conference for supporting benefit cuts and launched his campaign at international tax-avoidance specialists Ernst & Young! However, in putting Corbyn on the ballot paper they underestimated the risk they were taking, not understanding the potential popularity of an anti-austerity programme.

It is an ironic consequence of the complete destruction of the Labour Party’s democratic structures, via which the trade union movement could express its collective voice, that the Labour leadership has become a virtual lottery in which any individual – Labour supporter or not – can potentially vote.

This is more akin to a US-style ‘primary’ than to a democratic election of a party leader. Usually this system means that the party membership is dissolved into broader, more passive layers of the population, who are more influenced by the pro-capitalist propaganda from the mainstream media.

There is no doubt that in the remaining eight weeks of the Labour leadership contest much of the capitalist media will crank up the anti-Corbyn propaganda to try and make sure that he loses.

However, given the groundswell of support for Corbyn, and the extreme weakness of the more right-wing candidates, this is not guaranteed to succeed.

If Corbyn was to win, however, there is no prospect of this being accepted by the right-wing pro-capitalist elements that dominate both the Labour Party machine and the Parliamentary Labour Party.

Very probably the right would refuse to accept the result – perhaps on the basis of individual Tories having voted – and demand a new election. In whatever form it took, a civil war would erupt in the Labour Party.

Corbyn and his supporters would need to stand firm against the attacks of the right, fighting for a Labour Party with a clear socialist programme – and for the recreation of its destroyed democratic structures, including for the exclusion of the openly pro-capitalist elements and the re-admittance of those socialists – including supporters of the Militant Tendency (now the Socialist Party) – who were expelled as part of Labour’s transformation into a capitalist party.

If such a battle was engaged the Socialist Party would welcome it as potentially an important step on the road to solving the crisis of working-class political representation.

However – given the class character of the Labour Party today – it is more likely that such a struggle would result in the left being ejected from the party. This too, however, could create the base for a significant new workers’ party.

If, on the other hand, one of the three Blairite horrors wins the election we would urge Jeremy Corbyn and his supporters to draw all the necessary conclusions from their experience.

While anti-austerity ideas are viewed with horror by the Labour Party machine, the widespread support for Jeremy Corbyn’s campaign has already shown they are very popular among workers and young people.

A political voice for those ideas is urgently needed. The Socialist Party, along with others in the Trade Unionist and Socialist Coalition, has been campaigning to prepare the ground for the creation of such a party.

If Jeremy was defeated in the Labour leadership election but was then to call for his voters to join him in building a new party – with a clear anti-cuts, socialist programme – it could very quickly gain momentum.