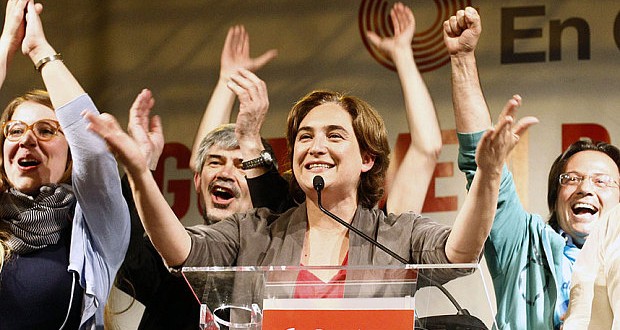 On 24 May, Spain held local elections throughout the state, as well as elections to 13 of its 17 regional parliaments. The results represent a further step in Spanish capitalism’s political crisis. They were especially brutal for the ruling right-wing PP, which lost power in all of its big city strongholds, including Madrid, Valencia, Sevilla and many others. They also lost their overall majorities in the majority of regions, and will be forced to rely on the support of ‘Ciudadanos’ (new right-wing populist party), which may come at a price.

Accompanying the fall in support for the PP – punishment for its brutal austerity agenda following 4 years of government for the very rich – was a surge in support for alternative left options. In developments not seen since the fall of the Franco dictatorship, the alternative Left is poised to take power in both Madrid and Barcelona, with the victory of Ada Colau – public face of the anti-evictions movement – in particular, making international headlines. At the same time, regional elections – in which ‘Podemos’ stood under its own banner – also registered steps forward, though significantly less than the results achieved by the broader Left lists in local elections.

Though confirming that Spain’s major urban centres remain epicentres of its shift to the Left, this success was also replicated in a swathe of cities and towns, both big and small, throughout the state. These are monumental steps forward for the workers and social movements, and leave them in a much stronger and more confident position from which to fight back against austerity and for a fundamental change. Two years ago, Ada Colau, was subjected to relentless media attacks, labelling her a “terrorist”, amid the establishment’s fear at the growing anti-evictions movement. That she will most likely emerge from the next few weeks as mayor of Spain’s second biggest city, will fill many with hope. The idea that “we, who have always lost have finally won” has extended itself.

At the same time, this success carries with it enormous responsibilities, and will require a wide debate about how to move forward from this strengthened position. If the correct approach is taken, these victories could be an invaluable step to prepare to step up the struggle of working people against austerity.

What were the “popular unity” lists?

The so called “popular unity” lists, had different names in different cities. “Ahora Madrid” (Now, Madrid) won over 30% of the vote in the capital, led by the Left wing judge, Manuela Carmena, while the “Barcelona en Comu” (Barcelona in common) list won over 20%, as the most voted list there.

These lists emerged from a process of convergence right across the movement. They included activists from the major Left formations – Podemos, Izquierda Unida (United Left), occasionally left nationalist formations like the CUP in Catalonia – as well as fighting trade unionists, anti-eviction fighters, anti-racist campaigners etc etc. Though associated by many with Podemos, they had a genuinely independent profile. Neither Colau nor Carmena are members of Podemos (or any other party), nor are many of the councillors elected.

Despite the ambiguous vocabulary and language they put out (reflected in the names chosen), these lists were quite clearly seen as representing a left, anti-austerity position. They generally stood on the basis of a programme which emphasised the need to democratically audit the public debt burden and an opposition to austerity cuts, standing in solidarity with the social and workers struggles underway and fighting for some of their central demands, such as a paralysis of evictions. They were repeatedly denounced and dismissed by PP figures as radical “communists”, which obviously did not deter the millions who turned out to hand them important victories.

However, the success of the Left now poses new questions on how to move further forward. Despite their stunning victories, even the most successful of these lists did not win overall majorities. This represents an increasingly challenging task in such a fragmented political landscape, with at least 5 parties entering most regional and local parliaments and councils. Winning a clear majority amid such fragmentation makes the need for a clear united project, with a viable plan to transform the situation, even more crucial.

These results raise the question of how the Left can govern on a local level without a majority. It is also posed in a number of places (including Madrid) where, despite being the second most voted list behind the PP, the Left has the potential to lead an alternative majority to the PP. Coalition governments could be formed, with joint cabinets involving PSOE or other forces. Many are and will argue in favour of such an arrangement, based on a certain “pragmatism”, seeking to get what is possible done as soon as possible etc. Alternatively, minority Left governments could be formed. This question is currently being debated in scores of cities, and is potentially a preparation for the same question being posed on a bigger scale in the run-up to general elections in November.

Socialismo Revolucionario (SR – CWI in Spain) argues that the discussion must start with programme. How can the Left, on the back of its election success, best further the struggle against austerity and facilitate an active fightback? A basic starting point is the refusal to continue with the implementation, and, to the greatest extent and as quickly as possible, work to undo the brutal anti-worker policies already implemented. As a party, PSOE – along with the ERC party in Catalonia, also prospective coalition partners in a “Left” coalition – is 100% committed to the implementation of austerity. It was the first party to introduce brutal cuts in the name of the current capitalist crisis, under the Zapatero government.

We think that the implementation of austerity – albeit of a more limited “light” variety – does not serve the interests of either the Left itself or the workers and young people enthused by its success. The experience of the Spanish United Left (IU) policy of joining coalitions with PSOE – most recently in the Andalucia region – has generally resulted in it being associated with the implementation of austerity rather than the fight against it. A repetition of such an experience now would be a serious step backwards, with the potential to derail the current progress the Left is making and to demoralise a layer of radicalised workers and youth.

SR fights for an alternative position, of minority Left governments based on a 100% anti-austerity programme and the mobilisation of working people to defend it and force the hand of other parties. This means putting a radical programme to the people, mobilising support in support of it, and appealing to the council to vote it through.

Organisation and struggle, not parliamentary arithmetic, will force change

A Left minority government, if it takes the correct approach, can be far more “pragmatic”, and achieve far more in terms of real gains, than a cross-class “compromise” coalition. The key to understanding this is in the realisation that what drives change is not parliamentary or institutional arithmetic, but social change and struggle. The current electoral success of the Left is an expression of the real struggle which millions of workers, youth and pensioners have waged against austerity in the last period; of the 3 general strikes in 2012 and 2013, the mass anti-evictions movement and endless other examples.

Rather than render such struggle redundant, success and a presence in the institutions gives it an enhanced importance and potential. A mobilised and organised working class is the key ingredient to the success of a 100% anti-austerity government. A minority Left government would announce the measures really necessary to do what is possible on a local level to end the austerity nightmare – refuse to implement cuts, privatisations, evictions or any other anti-worker policies, and invest in socially useful and necessary measures to provide jobs and homes.

For example, on the especially significant issue of evictions, such a government could declare its city an “eviction-free zone”, boycott the banks responsible for evictions and mobilise active support from the people for such a policy. This could paralyse evictions indefinitely, forcing the local authorities and local police – themselves opposed to the nightmare of mass evictions in many cases – to refuse to implement any planned evictions. The huge social support which this would generate would allow any Left government to face up to any legal “constitutional” challenge to such measures, and organise mass civil disobedience.

Such a policy, though not acceptable to the austerity parties, would electrify the working class and social movements. Serious organisation from below and mobilisations would generate an enormous social pressure in favour of such measures and in defence of the Left government. This atmosphere could force the hand of other parties, especially those of the so-called Left, or at least sections of them and provoke splits within them, which could be forced to support 100% anti-austerity policies. The historical example of Liverpool council in 1980s Britain must be studied and the necessary lessons learned. In this case, Militant (British CWI supporters, now the Socialist Party) had an important influence, but not a majority. But basing themselves on the working class outside the council, they still managed to pass life-changing measures in the face of the Thatcher government’s austerity..

100% anti-austerity governments could link up across different cities and towns, representing a significant rebel alliance, united in resisting attempts to impose austerity from outside. This would, as well as being effective on a local level, also serve to prepare the movement for the general elections and the task of electing a 100% anti-austerity Left government, under which the workers and social movements would flourish on a local level, as part of a coordinated anti-austerity movement throughout the country.

Podemos, the Left and the road to the general elections

The success of the “popular unity” lists shows the huge potential behind the model of broad united fronts, formed from below around a common anti-austerity programme. A striking feature was the performance of these lists when compared with the performance of Podemos and IU lists in the regional elections which took place simultaneously. Podemos came 3rd in most regional polls, missing out on displacing PSOE as the main “opposition” force. Only in the local elections, on the basis of a united Left front, has this been possible. As an example, in Madrid, the ‘Ahora Madrid’ local election list won 400,000 more votes than the Podemos regional list in the same region.

The lesson of these elections is that, in order to really challenge for a victory in the general elections, a similar strategy, of unity with others from below, is necessary on a larger scale.

This was even more dramatically brought home to the leaders of United Left, whose forces were split going into these elections. Its right wing bureaucracy insisted on standing independent lists against the popular unity lists in the majority of cities, with its left critical sectors joining these lists in defiance. Official IU lists were wiped out of the Madrid council before the surge of ‘Ahora Madrid’, with the same happening in many cities throughout the country. The IU regional lists also suffered near-annihilation in most regions. This will intensify the battle within the party, which is likely to split definitively in the coming period. The left critical sectors must act decisively and, around the figure of Alberto Garzon – IU’s electoral leader – could play a decisive role in the re-building of a united movement.

All indications point to the need to get to work to form a united front capable of fighting for a Left government in the general elections. An all-Spain repetition of the “popular unity” Left lists, formed on the basis of united democratic assemblies on a local and regional level, to democratically determine an anti-austerity programme and strategy would have immense potential. Armed with a 100% anti-austerity socialist programme, it could lay the basis for a new, mass party for the working class and youth, essential to the success of the Spanish revolution.