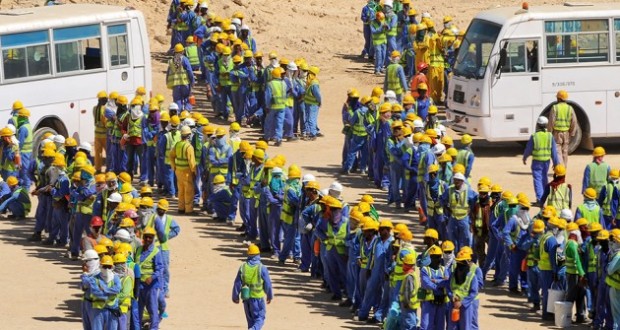 By Paddy Meehan
Sepp Blatter’s decision to resign as FIFA President didn’t come as a result of the horrifying conditions migrant workers face in building the new stadiums in Qatar, but as a final attempt to save the corrupt elite at the top of the federation.
A number of the voting members of the selection committee for the 2018 and 2022 World Cup bids have been accused of and prosecuted for accepting bribes. While FIFA sits on a multi-billion dollar industry, the world of migrant workers in Qatar couldn’t be more different.

Horrifying conditions in the desert

In a country with a native population of 278,000, there are 1.5 million migrant workers, most of them drawn from neighbouring states but also from Africa and the Middle East. Qatar is the world’s richest country per capita, at $145,894 per person. Yet workers in the new construction industry build the stadiums and infrastructure in the most horrendous conditions for slave pay.

Temperatures regularly exceed 50C and, with next to no health and safety regulations, the run up to the World Cup is being counted in the deaths of workers. The Play Fair Qatar campaign has said that they expect that “more than 62 workers will die for each game played during the 2022 tournament.” 964 workers from Nepal, India and Bangladesh were killed in 2012/13. If this rate continues, it is expected 4,000 workers could be killed by the time the tournament takes place.

The DLA Piper report from 2014 highlighted these figures and their causes. They also brought to light the Kafala slave labour programme where workers are legally tied to their bosses, where they have no rights and even have to ask their permission to leave the country. The Qatari regime made gestures that this and other anti-migrant worker measures would be abolished. To date this has not happened.
The 2022 World Cup will only be the latest in a long line of grotesque spectacles. At the last World Cup in Brazil, FIFA demanded elaborate stadia be built while slum conditions were maintained and in the favelas of Rio de Janeiro and Maracana. When people protested outside the games, they were viciously repressed by the state. Likewise in South Africa in 2010, police used tear gas and mace to attack striking security workers being paid poverty wages at the games.

No profiteering from football

The brutal conditions migrant workers face in Qatar are the logical conclusion of the profit-driven demands of the corrupt leadership at the top of FIFA that have ensured that football has become another plaything of the rich. The history of the game and its modern corruption is expertly explained by Socialist Party member John Reid in his book “Reclaim the Game”. As John argued then, instead of being run for profit, the game should be democratically owned and controlled by fans, players and staff.