“I’m not going to tell you anything you don’t already know”. That is comedian Russell Brand’s opening gambit in The Emperor’s New Clothes. You might not know these examples, he says, but you know the story of tax evasion and huge bonuses in the financial sector.

You know the story of the wrecked economy, of bank bail outs and austerity, he says, huge national debt meaning the poorer must get poorer and public services be slashed.

Driving around Canary Wharf with a megaphone, Brand warns passers-by not to approach bankers, they are “crafty”. Invading the headquarters of HSBC bank and others he wants to speak to CEOs and managers but is stuck trying to win round security guards.

We pay the price

Brand was right; you have heard it all before, maybe with less comedy but you know it. The gamblers, financiers and rich crashed the economy, but they haven’t paid for it. We have paid for the crisis through huge austerity, privatisation and cuts to local services.

The cinema was less than half full for the opening night of the documentary, even though director Michael Winterbottom and Russell Brand were to take part in a live question and answer session streamed to over 200 cinemas.

Brand does some digging in the documentary. He climbs into press magnate Lord Rothermere’s garden, complaining of his non-dom status and calling for him to pay tax. The difference between this documentary and others like it is the people who Brand actually gets to interview.

He tries to speak to bankers but when he can’t he turns to the Care UK strikers, New Era estate residents and the Bakers Union. War on Want, tax evasion campaigners and Paul Mason, even Youth Fight for Jobs were interviewed for it. One of Brand’s good friends is a firefighter and the attacks to them are outlined too.

Speaking to families in Grays in Essex, he looks into the community where he grew up and how it has been damaged by the recession. He meets the young mum who works an evening shift, finishing work at midnight, barely getting to see her kids. The teenager who can’t afford to go to university.

He speaks to the inner London cleaner, working two jobs and who would take 300 years to earn what top managers and chief executives earn in a year.

Brand sees the real face of the attacks on disability benefits and how they are destroying people’s lives. He uncovers food banks, who uses them and why they are needed.

Winterbottom votes Labour and that comes through, Clegg and Cameron take the biggest hits. Miliband and the Labour Party’s role on topics such as fees is glossed over.

How to change things

It’s angering to watch and be reminded of the vicious attacks on people’s living standards. But Brand has no real answers. You won’t leave the cinema knowing what to do next or how to change society.

The E15 mum campaign has resulted in 40 council homes being re-opened in Newham. TUSC and Socialist Party supporters in Coventry recently stopped a man being evicted from his home because of the bedroom tax.

We need to protest and we need a whole movement demanding an end to austerity, but we need working class and socialist political representation too if we seriously want to change the world.

Unfortunately, three days before the general election, Russell Brand mistakenly called for a vote for the Labour Party – although he later said he regretted this. It was a shame that Russell used his status among workers and young people in this way. 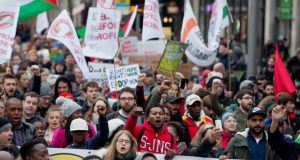 Mass movement defeated water charges before and will defeat them again