Kerry Fleck, a trade union official sent us a letter in reply to Stephen Boyd’s article in the Socialist, Trade unions & Sinn Fein: Dangerous times. here we publish Kerry’s article alongside a reply from Stephen. We welcome the opportunity to debate these important issues for the trade union movement.

“The trade union movement is not a political party”

The Trade Union Movement recognises, identifies and acknowledges the position of various political parties that have been hostile of members interests or supportive of members interests. For example they have supported campaigning or policy positions of Labour Parties in Britain and Ireland even when those policy positions and campaigning efforts were not successful. That is the positions that were supportive of members interests. It’s called politics. And the politics of the Trade Union movement is to campaign for the widest possible support for policy which assists in helping their members.

The Socialist Party should compare their criticism of John Douglas’ statement with their own public statements, which are, without exception, attacks on the trade union movement in general and trade union leaders (usually unnamed) in particular, excluding of course their own members who form a small proportion of that leadership.

The Socialist Party in its campaigning and polemics is the clearest example of the long road we have to travel – when they present themselves as the intellectual elite of socialism. It seems we have to start in the kindergarten of practical politics. Who was it said we need a “concrete analysis of a concrete situation”?

Communist Party member, Kerry Fleck’s criticisms readily sum up the view held by some leading trade unionists, that the role of the unions is to give backing, support and encouragement to the stormont parties.

Many of the most influential ICTU leaders accepted long ago the falsehood that there is no alternative to the capitalist market. They gave up any faith in the ability of the working class to struggle against austerity and the race to the bottom. When this is your starting point then all you can hope to achieve is a minimisation of the attacks on the working class. Austerity lite as opposed to full on austerity, when what is required is a struggle against all cuts – 100% opposition to austerity.

The only way that austerity can be stopped is by struggle. By public sector workers and working class communities uniting in a combination of strike action, mass demonstrations and a real mass movement against all cuts to defeats the parties in Stormont who are implementing austerity, such as the DUP and Sinn Fein.

The trade unions have a role to play in changing the Assembly and politics in Northern Ireland – but that will never be done by propping up the sectarian status quo, nor by lobbying or “encouraging” the sectarian parties or even by forming alliances with them.

The most important thing the trade unions can do is to assist the working class in fighting austerity and in helping them create a political alternative to the DUP, Sinn Fein and all of the rest of the unionist and nationalist parties that are part of the problem in our society not part of the solution. A real political challenge to austerity and sectarianism will only come about via the creation of a new mass working class party that can unite Protestant and Catholic working class people.

In the Dail on 24 March 2015, in relation to a motion opposing water charges and calling for a boycott of the charges, proposed by the Socialist Party and AAA, Gerry Adams said: “However, the motion also calls for a boycott of water charge bills by householders. This is not the Sinn Féin position…we do not call for a boycott”.

What is needed is an honest assessment of Sinn Fein’s position onhe water charges and welfare reform not a false left cover for their weak opposition nor should trade unionists assist Sinn Fein in perpetuating the lie that they are an anti-austerity party.

Sinn Fein signed up to the Stormont House Agreement which contains £1.3 billion of austerity. They have signed up twice to welfare reform – twice backing down – because of pressure from striking public sector workers and also for fear of voters in the South discovering that rather than being anti-austerity – Sinn Fein are in fact implementing austerity alongside the DUP.

When Sinn Fein finally does a deal on welfare reform, and they will – it will be on the basis not of actually stopping austerity – but on the basis of taking money from other public services to fund any concessions they get on welfare reform. Why does this deserve any praise at all from the trade unions? Sinn Fein are masquerading as anti-austerity when all they are doing is robbing Peter to pay Paul – taking funds from one public service for another!

In her letter of reply to the Socialist Party, Kerry Fleck quotes Lenin when she argues correctly that there is the need for a “concrete analysis of a concrete situation”. Unfortunately Kerry Fleck completely ignores Lenin and her own advice by virtue of basing her argument on an abstract analysis of the situation in Northern Ireland. She startlingly completely ignores the issue of sectarianism. It is as if the sectarian division of the working class has ceased to exist. As if sectarianism is a thing of the past. When in reality and concretely sectarianism and polarisation in society is growing and is a factor in daily life and politics that can’t be ignored or wished away.

To casually argue that trade unionists should simply praise or give encouragement to any sectarian party without recognising the potential damage that can be done to the trade union movement is recklessness of the highest order. For the President of the ICTU to go to a Sinn Fein Ard Fheis and uncritically heap praise on them and give them the stamp of approval of the unions as being anti-austerity is alarming and jeopardises the unity of the trade union movement. John Douglas would have better served public sector workers in the North if he had attacked Sinn Fein and the DUP for agreeing to get rid of 20,000 public sector jobs and criticised them for advocating the cutting of corporation tax for big business to the tune of £300 million a year.

We need independent and anti-sectarian trade unions. Independent of the parties that are implementing austerity. Independent of parties like the DUP and Sinn Fein who consciously use sectarianism to divide the working class. For the trade unions to be aligned to or in an alliance with any of the sectarian parties risks splitting the unions on sectarian lines. This would be a major blow to the working class and rather than strengthening the ability of working class people to unite against austerity it would strengthen the sectarian parties and paramilitaries for whom permanent division is their only basis for existence. 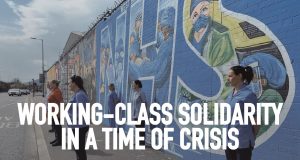