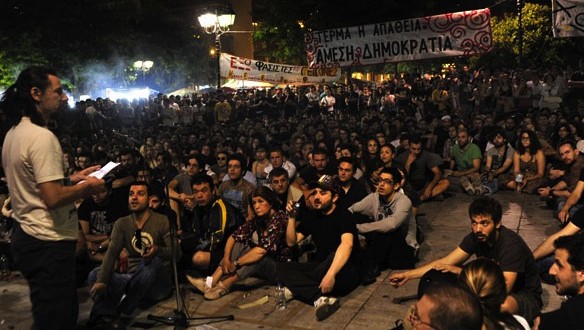 Why we need a left government

Austerity is a one-sided class war. The politicians hand in hand with the major employers have waged a war on the pay, conditions and living standards of the broad working class through swingeing cuts to public sector pay and services, zero-hour contracts in the private sector, JobBridge, home and water taxes and more. This war is being waged in the interests of an economic recovery for the super-rich.

New movement for a Left government

The explosion of the anti-water charges movement in the last six months gives a glimpse as to how we can build the basis of such a government. Working class people getting active – from those who’ve marched in their tens of thousands, to those who have effectively organised their neighbours to prevent water metering, to those who are now turning to building for a massive boycott of the water charges in their own communities – can be the basis of a new movement that actively fights austerity and also challenges it politically.

The Anti-Austerity Alliance is an organisation of ordinary working class activists building for mass non-payment on the ground that’s also got TDs and councillors who can use their elected positions to further the anti-austerity movement. This new movement gives a glimpse of the potential for a new mass working class political force that can make a Left Government a possibility in the coming years.

This fighting approach unfortunately stands in stark contrast to the 14 Sinn Fein TDs who oppose and have even spoken out against an organised boycott of the water charges. Mass boycott is the single most effective tactic that can be used to defeat this odious austerity measure.

Furthermore, the fact that Sinn Fein have campaigned for a lowering of corporation tax is in contradiction to their vocal opposition to austerity. A government that panders to the corporate elite – the likes of Margaret Heffernan, the Dunnes boss who has slashed working conditions and impoverished a generation of young workers – will not be an anti-austerity government. This puts in context the fact that Sinn Fein in government in the North are currently axing 20,000 public sector jobs.

End the dictatorship of the markets

A left government would refuse to pay the debts incurred due to the profiteering of the elite. It would go after the huge private wealth of super-rich individuals through progressive taxation. A left government would re-nationalise assets like Aer Lingus. Crucially, a left government would take the biggest corporations and industries, those that are the lever for the whole economy, into public ownership in order to challenge the ‘dictatorship of the markets’ and to build the basis for major investment in jobs, homes, services – for an economic recovery for the masses.

Such a programme would meet with fierce opposition from the profiteers being discommoded, both in Ireland and across Europe and would only be realisable on the basis of the government being inextricably linked with an active and organised working class movement. A movement which which would seek to put the democratic public ownership of the economy, under workers’ class control and management, at the heart of constructing a society that caters for the needs of the majority, not for the profits of the minority. Such a struggle in Ireland would be exalted by the masses in Greece, Spain, Portugal and across the EU and raise the potential for a democratic, socialist Europe for the millions, as the alternative to an undemocratic bosses’ EU for the millionaires.