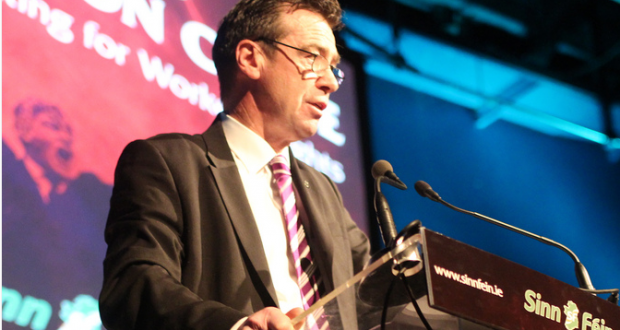 “We publish below an article originally printed in the northern March edition of The Socialist newspaper. Recent comments by trade union leaders, claiming that Sinn Fein are “anti-austerity” rings hollow when spoken at the same time that public sector workers are engaged in a struggle against savage Assembly cuts, including those imposed by Sinn Fein ministers. These statements also threaten the unity of Protestant and Catholic workers in the trade union movement in the North.”

The trade unions in Northern Ireland are a vital anti-sectarian force that unites over 200,000 Protestant and Catholics working class people. During the Troubles, it wasn’t the Orange or Green politicians that combated sectarianism and stopped society going over the edge to civil war. It was working class people who pushed their trade unions and NIC-ICTU to organise mass protests and strikes. For example, it was the mass demonstrations after the IRA’s Canary Wharf bombing – demanding “No Going Back” – that forced the Provos and the loyalist paramilitaries into permanent ceasefires.

Reckless statements made recently by some senior trade union officials pose a threat to the unity of the trade union movement in the North and raises the prospects of sectarian divisions opening up within our trade unions between Protestant and Catholic members.

Jack O’Connor, leader of the South’s biggest union SIPTU, has been openly courting Sinn Fein. SIPTU are affiliated to the Irish Labour Party, and its support has collapsed as it has been implementing massive austerity as part of the Southern coalition government. North and South the union leaders, rather than organising a real concerted struggle against the austerity being implemented by both governments, would rather back the likes of Sinn Fein in order to get a few crumbs from the table.

The Socialist Party believes that this is a very dangerous mistake. Sinn Fein is not a left party. They are a sectarian nationalist party who openly campaign for the interests of only one community in the North. Trade unionists and working class people have not forgotten the sectarian campaign of the Provisional IRA over 30 years. Nor should the trade union movement forget the many workers and trade unionists murdered by the IRA.

In 1974, post the loyalist UWC stoppage that brought down the Sunningdale Agreement, the call was issued by sectarian forces – backed by some in the labour and trade union movement – for the establishment of an Ulster TUC. This would have led to a disastrous split along sectarian lines within the trade unions, and in the years that followed, this further division in the working class could have led to civil war.

This threat can be posed again if the attempts by senior union officials to link the trade unions to Sinn Fein are not stopped. Links between the unions and Sinn Fein would result in sectarian divisions opening up with the unions with the possibility of an exodus by tens of thousands of Protestant members and even in the establishment of separate unions for Catholics and Protestants. These trade union leaders are playing with fire.

The Socialist Party has argued for decades that the trade unions need to be political – but this does not mean that support of any kind should be given to the sectarian parties such as Sinn Fein or the DUP.

Instead the trade unions should be involved in campaigning for the establishment of a anti-sectarian working class party that can be a real alternative to the sectarian parties such as the DUP and Sinn Fein and be a force that can unite Protestant and Catholics in a struggle for a better future for all free from sectarian conflict and poverty.