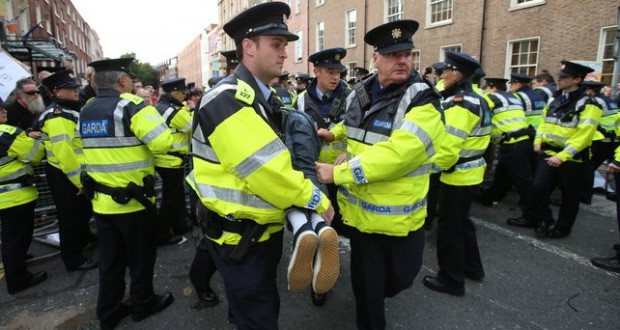 The State – a tool to defend the rule of the 1%

The Occupy movement that began in the US in 2011 coined the terms, the 1% and the 99%. The movement was evocatively referring to the existence of a ruling class, encapsulated in the term the 1% a – the super-rich elite that owns and controls the key global wealth, resources and means of production. The movement’s rallying-cry was quite prophetic as the most recent global Oxfam wealth report indicates that by 2016, the 1% richest in the world will hold more wealth than the other 99% of the global population.

As for this global 99%, the majority are poor, many extremely poor, and a large section of which are working class – that is they sell their labour as workers to survive for most of their lives, as well as their families, dependents etc. While the upper echelons of the 99% per se may have, or may feel they have quite a strong stake in the status quo, the potential for the majority of the 99% to side with an active, conscious working class, united in struggle against the dictatorship of the markets, the financiers and corporate rule, is huge.

“We are the 99%” highlighted that the super-wealthy and powerful are a tiny minority. In order to keep such an elite in power, capitalism, organised on the basis of nation states, requires a repressive state apparatus. This protection of the status quo, of the rule of the 1%, is at its most essential, the role of the state – the courts, the police and army etc.

Of course, there’s an objective necessity from the point of view of the maintenance of the status quo, that this bias and repression is not obvious or blatant at all moments in time, however, in times of heightened class conflict, and most especially of increasing working class consciousness, organisation and struggle, the role of the state can be seen clearly.

At this moment, the role of the state has been exposed to the thousands of anti-water charges campaigners and beyond. GMC Sierra was able to get an injunction with the aim of preventing effective anti-water metering protesting. Five activists have been jailed for breaking this injunction.

Or look at the state’s attack on Jobstown. Civil disobedience of mass, peaceful sit-down protest that’s a well-established political act going back to Martin Luther King and the Civil Rights movement and earlier, has been branded as a form of kidnap. It’s extremely serious that 23 working class people from one relatively small but extremely hard-pressed working class community who participated in a protest have been arrested, and that Anti Austerity Alliance TD, Paul Murphy, is facing serious charges as he’s painted as the ‘ring-leader’ by Gardai – but it’s also farcical as it exposes the state so clearly.

Malcolm X’s warning, that on an a average day might sound like hyperbole, is razor-sharp: “If you’re not careful, the newspapers will have you hating the people who are being oppressed, and loving the people who are doing the oppressing.” With Joan Burton, Minster for Homelessness, Water Charges and Cuts to Child Benefit, as victim and a working class community devastated by austerity as oppressor – the media certainly warmed the state up for its attack.

All sections of the establishment have been incensed and enraged by claims of ‘political policing’ by Anti Austerity Alliance public reps. Why have they reacted so? Because they do not like it when the nefarious workings of their system are exposed. They hold the independence of the Judiciary, the Gardai and the Dail in high regard – but this ‘independence’ is totally meaningless when the upper echelons of the Gardai, the Judiciary, and the Government of the day unite in times of class strife, to consciously defend the rule of the 1% status quo! Though it may not be orchestrated in a conspiratorial fashion – it’s fundamentally the truth.

Who makes up the ruling class?

Look at the class background of the judiciary – mixing in the same elite schools, with the same future business men and women – they propagate the class divide. A 2014 report on ‘social mobility’ in Britain for example, found that despite the fact that just 1% of the UK public was educated at Oxbridge, graduates from those universities made up 75% of senior judges, 59% of cabinet posts, 57% of permanent secretaries, 50% of diplomats, 47% of newspaper columnists, 44% of public body chairs and 33% of BBC executives.

A movement of the working class and all the oppressed can challenge and overcome the apparatus that enables the rule of the 1% if such a movement has an understanding of the role of the state, and a conscious socialist position. Disempowering the 1% requires a struggle for the democratic public ownership of key wealth and resources and the building of alternative organs of power – democratic, participatory community and workplace committees will be part of this process.