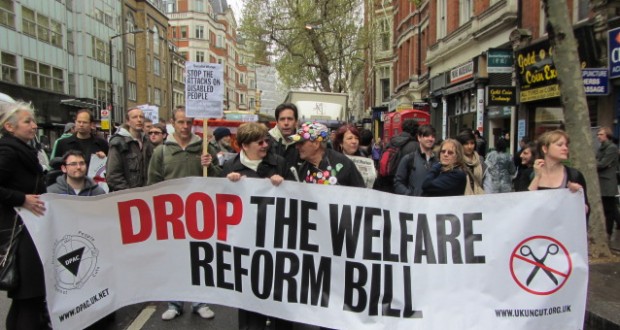 Only weeks after the “historic” Stormont House Agreement, the Assembly Executive hit another bump in the road, with Sinn Féin withdrawing support for the programme of attacks of benefits known as welfare “reform”. It had been agreed to set aside £125m over six years in order to mitigate against the worse elements of welfare reform. Sinn Féin are now claiming the DUP acted in “bad faith” in not protecting all those vulnerable to the changes and claiming that £411 million over six years is necessary.

However, this was not on the basis of principled opposition. Sinn Féin have twice agreed to introduce welfare reform, only to renege at a later point. So why have Sinn Féin done this about-face? Malachi O’Doherty, a commentator for the Belfast Telegraph, summed up the rationale behind the U-turn.

He said, “Maybe it has dawned on the party that in slashing services and triggering massive strike action later this week it is now the target of the unions and the workers. Has McGuinness suddenly seen more clearly what should have been obvious before, that the striking workers on Friday will be presenting Sinn Féin as the destroyer of jobs. Is he reflecting on how badly that will look in Dublin where Gerry Adams is insisting that Sinn Féin will create jobs in the public sector and fund services by taxing the better off?”

This gets to the heart of the issue. This is about pragmatic posturing. Sinn Féin fears losing face as an “anti-austerity” force, particularly in the South. The eyes of their party leadership are fixed firmly on their electoral prospects in the next South general election. However, Sinn Féin are still involved in pursuing an anti-working class, pro-austerity agenda in the North, destroying thousands of jobs, selling off public assets, running down public services and cutting corporation tax for the rich.

Peter Robinson has already refused to attend the annual St Patrick’s Day junket to the White House with Martin McGuinness over this issue. But much more is at stake including the potential unraveling of the Stormont House Agreement, which would mean the collapse of the Assembly and fresh elections earlier than planned.

This is a reflection of the nature of the Assembly. It stumbles from one crisis to the next, be it on openly sectarian issues such as the Maze Prison cenbtre or on issues reflecting the different interests of the political parties, into which they inject sectarianism. This can be seen in The Newsletter’s editorial in October which described West Belfast as being “lavishly tax-payer funded”, a reference to the scandalously high levels of unemployment and a blatant sectarian smear. But, likewise, the language used by Sinn Féin adds a nationalist sheen to their stance on welfare reform by referring to the cuts as “Tory cuts from London” or “British Tory cuts.”

Undoubtedly, the campaign by the trade unions in the North against the welfare reform was also a factor in Sinn Féin’s thinking, threatening to expose them. This shows struggle can force politicians back from implementing austerity measures. We haven’t just seen this with Sinn Féin, but also with DUP Minister Edwin Poots who was forced to withdraw plans to shut down residential care homes when faced with mass protests. The best answer we can deliver to politicians who are scared to implement austerity measures is not to thank them but to up the pressure. By building cross-community campaigns against the cuts and the a new political force that represents Protestant and Catholic workers, we can really terrify the Green and Orange Tories in Stormont