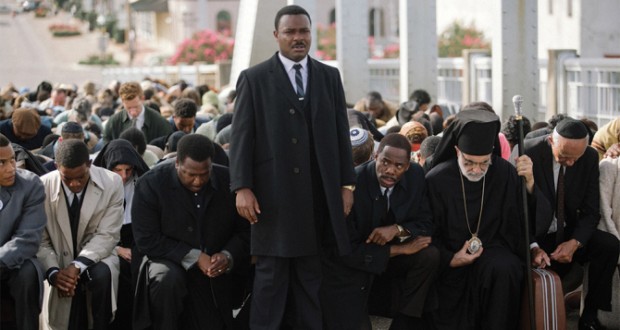 This month marks the 50th anniversary of the civil rights march from Selma, Alabama to Montgomery, the state capital, which was followed by the passing of the 1965 Civil Rights Act a few months later. The film “Selma” graphically portrays the everyday humiliations faced by African Americans as well as the brutal violence they received from cops and organised racists when they campaigned for voting rights and desegregation.

John Legend, who accepted an Oscar for his song which appeared in the film, smashed through the pro-imperialist, superficial atmosphere of the awards ceremony to mention that the voting rights that the civil rights activists fought for are being rolled back across America today, and that the US is the “the most incarcerated country in the world. There are more black men under correctional control today than were under slavery in 1850…. right now the struggle for justice and freedom is real.” The director, Ava DuVernay, stated that she was shocked by the release of the film uncannily coinciding with the #blacklivesmatter movement, which erupted after Eric Garner and Mike Brown were murdered by police.

Many of the young people which have become politically active in places like Ferguson, Missouri in recent months will welcome the exposure of police violence in the film. Protestors in Ferguson have been subject to beatings and tear gas fumes, which were used against the Selma marchers’ first unsuccessful attempt to cross the Pettus bridge, on the road to Montgomery, in the film. The film also serves a warning to activists with the constant FBI surveillance that Martin Luther King and others endured.

Many women, who make up the majority of the #blacklivesmatter movement, will be understandably disappointed that the film completely ignores the role of Diane Nash, co-founder of the Student Nonviolent Coordinating Committee (SNCC), who played a central role in the struggle in Selma. The film also presents a clichéd characterisation of Martin Luther King’s wife, Coretta Scott King.

In the film, Coretta adds pressure to MLK’s situation by complaining about the financial sacrifices their family has made and admonishes him about the danger he’s putting himself through. In reality she was politically active before she met King. She protested against the Vietnam War in the early 60s years before MLK publicly criticised the war before his death. Far from being an apolitical appendage to MLK, as portrayed in the film, she became an outspoken campaigner for gay and lesbian rights, in defiance of the Christian leaders who succeeded MLK.

Although the film shows that when ordinary people get organised, they can achieve momentous victories, it also shows the understanding MLK had that the abolition of legal discrimination was just the beginning of the struggle for equality. As he says in the film, “What good is it to be able to sit at a lunch counter if you can’t afford to buy a hamburger?”

Even with a black president in the Whitehouse, poverty rates have increased for people of colour. In Selma today, 60% of children live in poverty. In a speech in 1966 MLK had come to the conclusion that systemic change is needed:

“We are saying that something is wrong … with capitalism…. There must be better distribution of wealth and maybe America must move toward a democratic socialism”