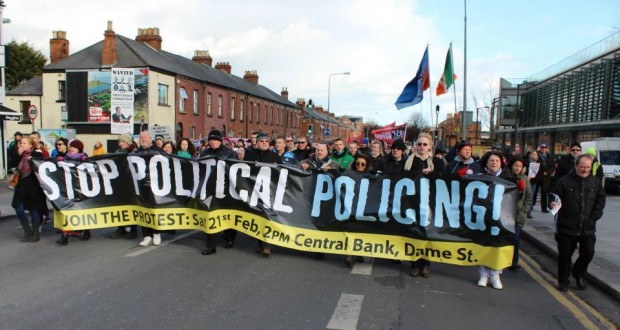 Sharp lessons have been learnt by anti-water charges campaigners in the course of the last six months about the role of the repressive arm of the state (Gardai, judiciary and prisons) when it comes to curbing effective protest tactics like blockading ministerial cars and preventing meter installation.

One law for the working class…

For many people it has been a revelation that policing austerity is clearly more of a priority in the allocation of Garda resources than dealing with crime. Specifically in the case of Tallaght, the dedication of an incident room and four Garda inspectors over a two and a half month period between the Joan Burton protest in Jobstown and the arrest of 23 activists and public representatives including Paul Murphy is political policing.

A refrain of politicians and media types has been that the law must be adhered to as if the law and how it is applied is blind to the reality of the struggle that is going on in society.

…another for the super-rich

The reality is that the rule book is out the window when it suits the interest of the super-rich.  Consider the total absence of prosecutions arising from the recent exposure of the existence of 300 HSBC Swiss accounts held by Irish citizens for tax purposes.

Scores of complaints that have been made by people to the Health and Safety Authority of unsafe work practices on the part of water meter installers typically did not resulted in any follow up action and in only one instance result in a temporary site closure. Finally  GMC Sierra, owned by Denis O’Brien, successfully bid for a massive chunk of the contracts for meter installation even though the company was not properly registered for a full two weeks after the tendering process closed.

The state picked its moment for the arrests and jailings. They could have occurred at an earlier stage but politics came into the timing. The establishment, despite having made a significant temporary retreat on the billing regime in November, saw yet another mass protest on 10 December. The government did not budge any further provoking an amount of debate within the campaign  about the next steps for the struggle.

Confusion over the status of the 31 of January as a national Right2Water day of local actions saw a relatively smaller turnout which has been spun wrongly as a sign that the campaign is ebbing. However the momentum was interrupted and the state saw an opportunity to move in with arrests and jailings coupled with a media campaign of demonisation, all in an effort to separate the broad mass of ‘good protesters’ who they claim are now pacified from what they paint as a militant unrepresentative minority.

A response at two levels is required by the anti-water charges movement. It is vital that all of the anti-water charges movement responds to the repressive measures through specific protest actions themed around the right to protest and opposition to political policing, the likes of which were organised outside the Department of Justice and Mountjoy Prison. Likewise with effective counter-propaganda through the media and public representatives to expose political policing, an approach that paid off in Tallaght as the arrests tapered off at 23 when up to 40 were originally planned.

Then positively basing ourselves on the registration figures which are a disaster for Irish Water and the fact that opinion polls show that at most only 40% of people are inclined to pay, we have to re-activate as many people as possible through big events like the 21 March Right2Water demonstration which, alongside consistent local work that serves to organise non-payment, will be the winning of this struggle