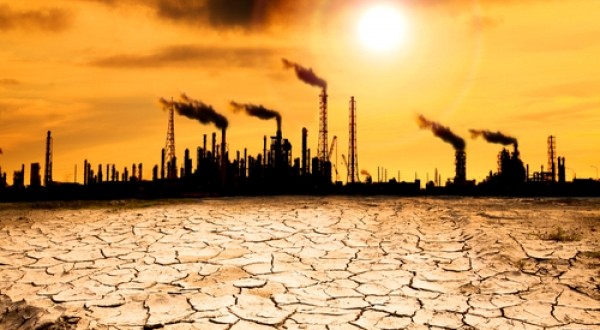 Capitalist profiteering is destroying our planet

The world is hurtling towards environmental disaster. In the words of prominent American climate scientist, James Hansen climate change has brought us to the “precipice of a great “tipping point” where we are facing the prospect of the earth transitioning into “a different planet” in terms of climate and environment.

Despite all the international conferences and fine words from politicians and big business, global carbon dioxide emissions continue to increase year on year. While emissions are declining slightly in the industrialised world, in the US emissions remain higher than in 1990. In the EU-15 countries emissions are down by 13.8% since 1990 but this should be seen in the context of the Kyoto Protocol’s target of a 55% reduction by this point. The FG/Labour government here is currently pushing through a climate change bill which contains no target for reduction of carbon emissions at all!

The target of remaining under two degrees warming is not on track to be met, and three degrees is now a real possibility. 3 degrees would likely see increasing areas of the planet being rendered essentially uninhabitable by drought and heat, a continued escalation of extreme weather events, the endangering of food and water supplies for huge numbers of people and a resulting refugee crisis on a scale never before seen.

If global temperatures rise by three degrees, the Himalayan ice sheet will melt and water flows into key Asian rivers such as the Indus will fall by up to 90%. Already in the Arctic, permafrost is starting to melt, triggering the release of methane, a greenhouse gas which is twenty times more powerful than CO2. This threatens a ‘feedback’ effect whereby the effects of global warming perpetuate themselves spiralling completely out of control.

To avert this process, the IPCC estimates that a 50% reduction in carbon emissions in the ‘developed’ world by 2020 is necessary. So how can a problem which is so urgent be allowed to continue to worsen? The reality is that Fossil Fuels are big business, and the kinds of policies necessary to tackle climate change go completely against the grain of the profit-driven market system.

A recent report in the journal, Climatic Change, says that a mere 90 companies have produced 63% of the cumulative global carbon emissions from 1751 to 2010. Serious action on climate change would destroy the profitibility of these companies, which wield huge economic and political influence.

Trillions of euros worth of ‘stranded assets’ would be lost. According to the Carbon tracker institute in Britain, the Fossil Fuel industry has five times more carbon in reserve, counted towards stock prices etc, than the atmosphere can absorb if we want to have a 50/50 chance of staying below 2 degrees of warming.

Investment in renewable energy is badly needed, but the Fossil Fuel Industry spends less than 1% of its budget on renewables.. The economic crisis of capitalism has had a major impact. Globally, investment in renewables rose to a record $257 billion in 2011, but has fallen 23% since, particularly in countries like Germany and Italy. Austerity and the Euro crisis are a major factor.

The competition between companies and nation states which is at the core of capitalism is a huge barrier to effectively taking on the environmental crisis. The farce of ‘carbon trading’ schemes was exposed when it was revealed that companies in India and China were intentionally producing the extremely potent greenhouse gas hfc 23 in other to gain carbon credits for reducing it. In Germany, where, 25% of energy now comes from renewable sources, emissions have remained largely the same as the country continues to produce coal for export.

Mark Jacobsen of Stanford University in the US recently published a detailed plan to move the world to 100% renewables by 2050, including the amount of resources which would be needed in money and land. But implementing a global plan to transition the world away from the use of fossil fuels, to expand public transport, to research new technology etc requires a socialist world where resources are in democratic public ownership, and where these resources are used on the basis need not profit, co-operation not competition.