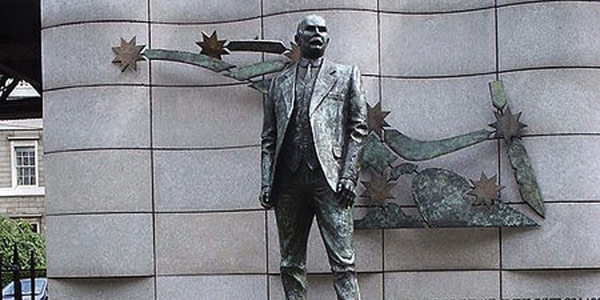 Review of a classic: James Connolly’s “Socialism Made Easy”

Probably Connolly’s most famous pamphlet, this short collection of articles is one that should be read by every activist and opponent of oppression. Dealing with topics such as the need for strong, fighting trade unions, a political voice for workers and real democracy – many passages could have been written yesterday. It also answers many of the anti-socialist slanders that still feature in the scripts of Enda and co, such as the claim socialists are impractical or violent.

Being “practical” means selling out

The first article in this collection is laced with sarcasm and wit as Connolly rips up these myths. For instance, he explains how those who call for “practical” policies and who work within the system are precisely the ones incapable of making any real change, whilst it has always been radical movements that actually secured improvements. Connolly ridicules those “practical” politicians as sharply and comically as Russell Brand at his best, pointing out how for them: “a party too indifferent to the sorrow and sufferings of humanity to raise its voice in protest, is a moderate, practical party”.

The second section of the pamphlet has a more sombre tone, but is equally as sharp. Here he lays bare the weaknesses of the workers movement at the time, how in a series of struggles they had been beaten by the bosses. However, far from accept defeat, he asks what lessons must be learnt. He argues workers must get more organised and more militant.

Almost as if he was talking about the recent bus and rail strikes in Ireland, he explains how we cannot allow bosses to pick on workers one section at a time, and use one group to pick up the slack when the other strikes. Instead he argues for building the strongest, broadest movement, and striking together to force the boss to give in. Connolly is not content for workers to only be organised in their workplaces and act together industrially, he also argues that we must organise politically to take on the bosses in that arena too.

The case for socialist change

Finally, the pamphlet is a strong argument for socialism, which he discribes in this pamphlet as the “great anti-theft movement” – taking back from the 1% the wealth they have stolen from workers. Foreshadowing the slogan of the Spanish Indignados that “there is no democracy when the markets rule”, he argues for democratic, public ownserhip of the key sectors of the economy to allow “the application to industry, or to the Social life of the nation, of the fundamental principles of democracy”.

All in all, this is a fantastic short pamphlet, a must read.

Read it online at: http://www.marxist.net/ireland/connolly/socialism/