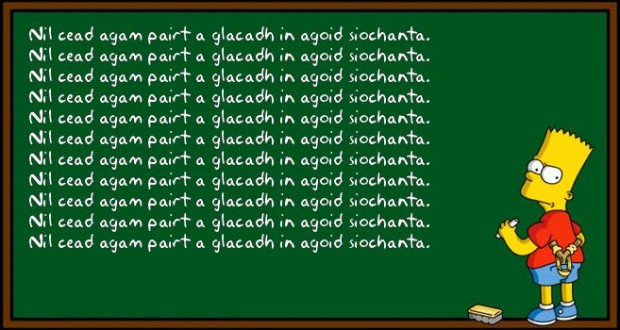 Last Friday, 6 February, a number of senior students from the Irish-medium secondary school, Colaiste Oiriall, in Co. Monaghan were denied the right to peacefully protest. These students had organised themselves to walk out of the school upon the arrival of an Taoiseach, Enda Kenny, and the Minister for Arts, Heritage and Gaeltacht, Heather Humphreys for the official opening of the new education campus. Two figures who have caused much distress and imposed much hardship on working class and young people in recent times; through foisting draconian austerity measures on them. These government figures were being welcomed with open arms by the Gaelcholáiste’s Principal and board of management, however this number of students did not approve of the warm welcome that was planned for Ireland’s General of austerity and for the non-Irish speaking Minister for Gaeltacht. It was because of this misrepresentation that they decided action was needed.Throughout the week, discussions were held and hushed conversations filled the school passages. The indignation at the current state of affairs and an increasing politicisation was present; talk of water charges, youth guarantees and a life of contributing to European debt repayments spelled a bleak future for this generation under the current system. The passion for the Irish language amongst the group led one of the student organisers to contact a number of notable native speakers. Representatives of the Irish language movement “Misneach” offered their full support for the walk out of these young gaelgóirí. This group of 5th and 6th year students decided that they would avail of their fundamental human rights and form a strictly “as gaeilge” picket alongside the planned protest by the people of Monaghan. This is a copy of the message that circulated throughout the senior student body on Thursday afternoon.

-peaceful protest-organised and led by senior students-raking place at beginning of am lón beag-beidh seo uilig as Gaeilge-all info below-Any questions, please contact either Aindriú de Buitléir or Jamie o Suiligh As most of you already know Enda Kenny will be arriving on Campus tomorrow between 11am-12pm.This is the man who has enforced the brutal and unnecessary water charges, appointed a non-Irish speaker as the minister for Gaeltacht (literally any of you would be better suited for this), continued to impose austerity (this means raising the taxes and lowering wages) and refuses to listen to the majority of people. We, the students of Colaiste Oiriall, feel both morally and politically obliged to do something about this. This is our right and our opportunity, to turn the wheel of change and stand up for the young people in Ireland. We will not sit idly by and let this man ruin our futures, therefore we call upon you, the senior students, to make a stand together against the arrival of the Taoiseach tomorrow, to join us in a walk out and let him know that he is not welcome.It is your right to protest, therefore there is nothing the school can do, basically this doesn’t concern them and you will not be put in danger / severely punished. We have the full support of 3 TDs, Trade union reps and the people of Monaghan and we will not be alone, we are forming our own picket alongside roughly 100 people from all over Co. Monaghan at the front gates of the campus.Le chéile, we can send a powerful message to the Taoiseach and the government, sa teanga dúchais agus chun troid ar son ár dtoghchaí. Ní neart go cur le chéile!”

The group of students arrived at the school on Friday morning with placards stuffed in schoolbags and chants at the ready. Information of the walk out had been leaked the night before and a meeting was called with two 6th year students shortly after 9am, these being two organisers for the walk out.

This was presumably to advise the students to call off the action, however, the Principal, VP and head of discipline stated that there would be no protest of any kind. After auguring the two students with suspension and raising the possibility of expulsion they were returned to class. Teachers delivered the message to every class, stating that the students had to remain indoors.This exercise of student activism was halted by the Principal who condemned the student’s right to protest and attempted to discredit the students themselves for taking part in the walkout. The students involved here maintain the utmost respect for the teaching staff of the Gaelcholaiste. That said, they have expressed their disappointment at the actions of their Principal. Is it time to look at our education system and the structure put in place for second level students, is it fair to discourage students to be politically active on the basis of ageism?