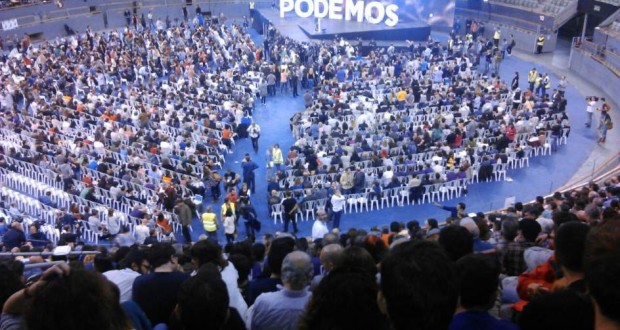 Podemos (Spanish for “we can”) is a new left part that is currently leading in opinion polls with 28.7 %. This means Podemos is ahead of the governing PP with 19.2% and also 5% ahead of PSOE, marking an end of the two-party system that has existed since the end of Franco’s dictatorship.

This is the second political earthquake caused by the party since its recent foundation in January 2014: Podemos won 8%, or 5 deputies,in the election to the European parliament only 5 month later.

Podemos’ development is also significant because the party came out of the 2011 mass movement from below, the Indignados (the outraged)

Since the property bubble burst 7 years ago, the working class has shouldered the burden of economic crisis with drastic cuts in public services and the welfare system, affecting the unemployed and people on low income most. That and mass unemployment, rampant among the under 30s, politicised a layer of young people, who started initiatives from below such as occupations of squares that developed into a vivid movement – inspiring similar if smaller movements in other countries.

As a result of Podemos emerging from struggle, there is an orientation towards mass action and demand for the party to be open and democratic. In reality Podemos is centred around one figure, Pablo Iglesias and proper democratic discussions need to be established that give the membership a say in its programme and strategy.

Elections are in autumn and the election of a Podemos led government would give people confidence to struggle and to generalise the resistance that is currently localised and blocked by the trade union leadership.

Similarly repercussions will be felt all over Europe, depending also on the result in Greece in the upcoming snap elections.

A media campaign can be expected to warn of chaos in the case Podemos wins the elections and danger to “national unity”.

By replacing Mariano Rajoy as head of government, Angela Merkel & co. would lose a loyal follower of their austerity policies.

In addition, leaders of both established parties have been found out to be corrupt, prompting the PSOE to present a new leadership, which failed to fool people. The right-wing PP are trying to sit the scandals out, alienating a layer of former voters.

The rapid development of Podemos shows people’s thirst for radical answers and alternatives to the neoliberal austerity policies of the past.

There is the risk that these demands will not be fulfilled by Podemos as there are some weaknesses in their programme; demands include for example the “limitation of privatisation“ or “more public control in private companies“

The rise of Podemos has had a positive effect on discussions on the left in Spain, strengthening the left inside Izquierda Unida (United Left party initiated by the Spanish Communist Party) against a bureaucratic right-wing leadership that orientates towards agreement with the leadership of the big trade unions and participation in future governments, instead of orientating towards struggles and the radicalised layers.

Socialismo Revolucionario, the sister organisation of the Socialist party argues in both parties for a programme that includes demands such as rejection of participation in governments with austerity parties, the non-payment of the debt, the nationalisation of the banks under control of the working class and the right of self-determination of minorities. 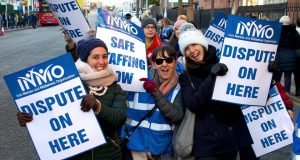