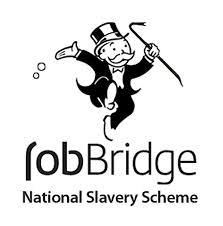 Paul Murphy TD, who founded the anti-free labour campaign ScamBridge.ie, has said that the report launched by the National Youth Council of Ireland,  JobBridge: Stepping Stone or Dead End, puts the government’s approach to so-called labour activation schemes into disarray

“This report by the National Youth Council of Ireland confirms what I and ScamBridge.ie have been saying about JobBridge for the last few years and must cause a serious crisis for Joan Burton and Kevin Humphreys.

“It proves beyond any doubt that the scheme is beyond reform and must be scrapped but more importantly shows that the government’s approach to introduce mandatory Workfare schemes is flawed.

“58% of interns responded saying that they weren’t or were only sometimes treated like staff. Most damningly, for the government and in particular the Labour Party who have defended this scheme to the hilt, 44% said that they felt the scheme was being used by employers solely for free labour.

“In the face of claims of abuse of the scheme, the government have said that there are huge numbers of inspections and complaints from interns are investigated, yet 55.7% of interns said that they were unaware they could complain or were unwilling to complain preferring to just keep their head down and get through it.

“However, the most important finding, and the one which shatters a key plank of the government’s approach to so called labour activation schemes is that 100% of participants who felt compelled or were forced onto the scheme because of threats to their welfare payment were dissatisfied with the scheme. The importance of this finding cannot be understated.

“A key policy has been to make these schemes mandatory or face having your dole cut. Under the Youth Guarantee participation in schemes was made compulsory, Gateway is compulsory. Only last month Joan Burton launched First Steps, which was basically JobBridge by another name, but it is compulsory. Their whole approach is now not only called into question but is now proven to be flawed from start to finish.”