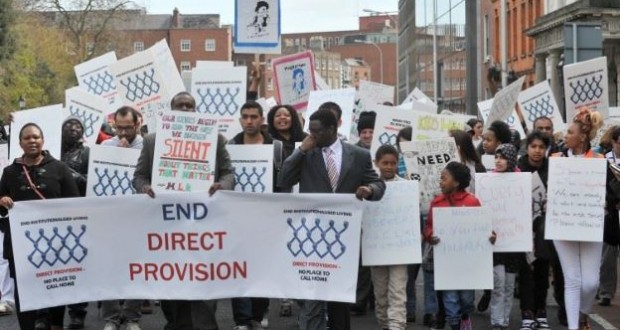 After being forced to flee their country, asylum seekers end up being marginalized here and become one of the most vulnerable sections of society. They end up being stripped of some of their rights. They can’t work or get proper education, are placed in cramped accommodation, and have limited control over when or what they eat.

Direct provision is akin to the ghettoisation of a community and can have adverse effects on the health, both physical and mental, of the asylum seekers forced into these centers. Already this year two examples of how asylum seekers suffer under this system have thrown the issue to the fore.

One was the case of Mohamed Sleyum Ali a Somalia national. Mohamed was sent to Cloverhill Prison while waiting to be deported. This limits the ability to interact with lawyers and bodies such as the Irish Refugee Council. Hours after being deported to Tanzania, Mohamed was attacked and would later die from his injuries.

The other involved a flight in 2010. The flight had 36 deportees including children. After the flight had to return to Dublin, the Irish Refugee Council received information that some people were handcuffed and at times stopped from using the toilets. This ended up with one child wetting himself and two others being made to urinate into bottles.

Often the capitalist establishment uses asylum seekers as scapegoats, saying they are a drain on society, they take our jobs and lower the wages of workers. It is they who attack workers’ wages and jobs are lost when companies move in their search to increase their already bloated wealth.

We must demand the right of asylum for those who come here to flee persecution and oppression. We must demand jobs, homes and services for Irish and migrants alike and not allow ourselves to be divided by our common enemy.