With the New Year upon us, a new phase in the water charges struggle has begun. It is clear that the Government intends to wait out the anger and hopes that momentum will drip from the movement now that the legislation has been passed into law.

We are only four bills away – at most – from a General Election, before which there are no sanctions if you do not pay. Therefore it’s clear that a key tactic in this phase of the struggle is organised mass non-payment.

It is not simply one of many equal tactics, it is the singular most direct and effective form of protest we have. Irish Water want our money, we must refuse to give it to them. Any level of compliance when the bills drop will be seized upon by the capitalist establishment to declare the campaign over. The momentum of the campaign would stall and the Government would hope that it will give them space to recover the ground they lost over the past year.

We cannot take anything for granted. Opinion polls indicate that there is a momentum behind the idea of non-payment but that it is still all to play for. According to the Millward Brown poll from 21st December, 37 percent of respondents say they will pay, 14 percent say “it depends” if they will pay or not and 10 percent say they “don’t know”. What does it depend on? The question of whether water charges can be defeated and what are the consequences of standing up to Irish Water.

An active campaign can answer doubts

Active campaigns on the ground are capable of answering these doubts people have and bringing them into the non-payment camp. Lots of people have gotten involved in building anti-water charges groups in their local communities through anti-meter protests, often getting active for the very first time. Many more have been mobilised by the mass demonstrations we have seen around the country. This is the strength of the campaign – a mass movement in every sense of the word.

The level of non-payment will be decisive to the outcome of this struggle. The Government know this too. There will undoubtedly be a barrage of propaganda and intimidation from the billionaire-owned media whose interests are not served by an ongoing mass, active movement against austerity in communities.

Those lies will have to be answered, but by whom? Unless campaigns exist locally, the offensive by the establishment could prove successful in diminishing the levels of non-payment and therefore the campaign. Non-payment has to be actively advocated and defended, and that can’t just be done through occasional protests or calls over social media.

We can defeat this Government

It cannot be a case of talking to the already converted, but identifying people who are more unsure or inclined to pay and consciously seeking them out with the intention of turning them over to our side. However, that will only be possible by having a campaign in the areas that answer the arguments of the Government and give people confidence.
Understandably, most people who are active now have never been involved in anything like this before and are faced with concrete organisational questions that haven’t come up so far. If the collective experience of everyone involved is tapped into we can overcome that hurdle and achieve a truly historic victory over this Government and the whole old rotten establishment. 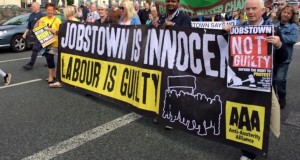