Joe Higgins on the politics of right-wing populism

A General Election looms. It cannot be delayed beyond April of next year. However, with mass mobilisations against water charges and austerity, the Fine Gael/Labour Coalition government was shown to have clumsy feet of clay and there is no certainty that it will survive until next year especially if there is a renewed upsurge of anger in society.

This is the background to the constant speculation in the capitalist media about new political formations being launched by various politicians and political factions based in the Dáil. For more than a year now Independent Newspapers especially, have been desperately attempting to push former Fine Gael Minister of State, Lucinda Creighton, into launching a political party. As she appeared to drag her feet, they moved to talk up Dublin South TD, Shane Ross, as launching a new network of independent Dáil deputies and councillors and more recently bolstered the credentials of Michael Fitzmaurice recently returned in the Roscommon By election as a man to lead a new rural group of deputies in the next Dáil.

Collapse in support for establishment parties

There has been a massive shift in the attitudes of ordinary people away from the establishment political parties. Six years of austerity and the cynical breaking of promises by the current government parties have massively undermined the credibility of Fianna Fail, Fine Gael and the Labour Party. The huge movement against the water charges in the closing months of last year has further sharpened this process. Opinion polls show the results, a catastrophic fall in support for the government parties and a significant increase in support for Sinn Fein, for Independents and for the smaller anti-establishment parties of the Left as seen in the remarkable by-election wins by the Socialist Party and the Anti-Austerity Alliance.

This new political reality is terrifying the capitalist establishment in this State which is fearful it may not have a reliable majority in the Dail to protect its interests and profits. This explains the manoeuvrings of Independent News and Media. They are desperately trying to create a political safety net to halt a mass of voters going over to Sinn Fein and to the Left by encouraging these new alliances. While they understand that Sinn Fein is introducing Tory austerity in the North, it is positioning itself in the South as an anti-austerity party and the establishment fears that Sinn Fein in government could come under heavy pressure from working class voters to oppose further austerity thus complicating the continued implementation of the neo liberal agenda.

The politics of right wing populism

The various alliances being promoted are for the purpose of fashioning a few pillars on which the weakened capitalist parties might be able to rely to form a government after the election. Make no mistake such a government would be firmly on the Right in its economic policy. Shane Ross is quite skilled at striking anti political establishment notes and regularly attacks the ‘insiders’ in the banks, in business generally and in establishment politics. But behind the populist rhetoric, he is totally committed to the capitalist market and indeed was a big admirer of Anglo Irish Bank as it inflated the property bubble in the lead up to the crash in 2008. Whether supporting a government from inside or out his alliance would underpin the economic status quo.

There is often a tendency among many populist politicians to attempt to say they are neither Right nor Left. The Green Party tries the same tack. But, in government, that posture quickly evaporates in front of the demands of the capitalist establishment as seen when the Greens treacherously joined Fianna Fail to impose savage austerity after the 2007 election. That is why working class people need an independent party to fight in their interest and campaign for a Left government to replace capitalism with the fundamental socialist transformation that is needed to resolve the crucial problems caused by the crisis and consequent austerity. 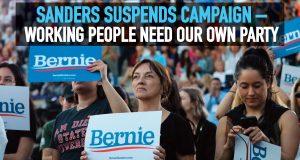